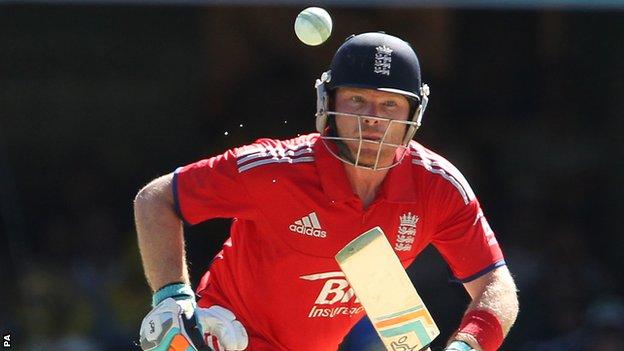 Warwickshire batsman Ian Bell has been added to the England squad for the Twenty20 series in the West Indies as cover for Eoin Morgan and Alex Hales.

Morgan and Hales missed the opening one-day defeat on Friday with knee and thigh injuries respectively.

The first Twenty20 international of the three-match series is in Barbados on 9 March.

Although Bell, a former England and Warwickshire team-mate of Giles, was not named in England's 15-man squad for the upcoming ICC World Twenty20 - or the provisional 30-man squad - he can be added with the permission of the International Cricket Council.

Giles added: "He wasn't in the original 30, but with those two different sorts of players [Morgan and Hales] and the cover we need, and the conditions we are going to face in Bangladesh, Belly has the ability to play all those different roles."

The former Warwickshire coach knows results in this series and the World Twenty20 will go a long way towards deciding his future in the England set-up.

He is regarded as the front-runner to replace Andy Flower, who stepped down as England's team director following the 5-0 Ashes series whitewash, as head coach for all formats, but he believes he remains the best candidate.

"I believe I am the right man for the job," said Giles, who admitted he was "very interested" in the post immediately after Flower resigned.

"People on the outside will all have opinions about how good a coach I am or not.

"I enjoy these phases that teams go through and I think England are very much in a rebuilding phase - I went through a similar thing with Warwickshire at the start of my coaching career.