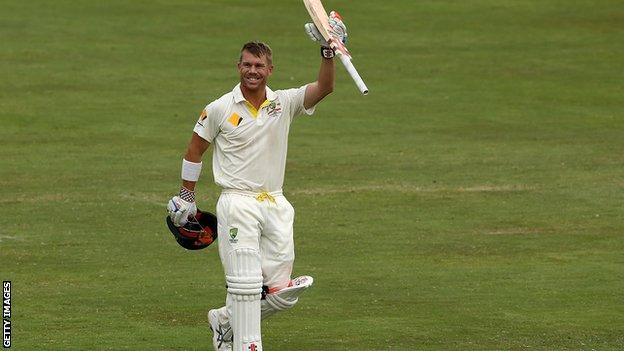 Opener David Warner hit a century as Australia shone on day one of the final Test with South Africa in Cape Town.

Left-hander Warner hit 135 while captain Michael Clarke was unbeaten on 92 as Australia reached 331-3.

The Proteas were hindered by pace spearhead Dale Steyn limping off at lunch after bowling only 10.1 overs.

Warner's innings came only days after he was fined 15% of his match fee for accusing South Africa wicketkeeper AB de Villiers of ball-tampering.

He was positive from the start after Australia won the toss on a lifeless pitch, even after Steyn had opener Chris Rogers caught at second slip by captain Graeme Smith.

Warner smashed 12 fours and a six in his 152-ball stay and reached his seventh Test century before falling to a catch behind by De Villiers off spinner JP Duminy.

But his demise failed to earn any respite for the weary South African attack at Newlands, with Clarke and Steve Smith, who hit 50 not out, forging an unbroken 114-run fourth wicket partnership.

Steyn, who claimed 4-55 at Port Elizabeth to help South Africa level the series with a 231-run second Test victory, complained of a sore right hamstring and will be assessed before the start of the second day to determine whether he can continue bowling.

In his absence, Morne Morkel was South Africa's most potent threat, hitting Clarke on the elbow, gloves and the back of the helmet during a spell of ferocious fast bowling.

But Clarke withstood the barrage and had hit nine fours by the close.