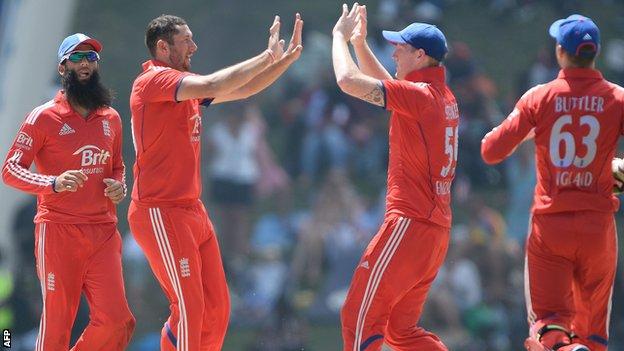 Captain Stuart Broad was delighted his bowlers learned from their previous mistakes to help England to a three-wicket victory over West Indies.

Broad blamed his attack for failing to kill off the opposition in the first of the three-match one day series, as they slipped to a 15-run defeat on Friday.

"The guys learned from the other day and to bowl the West Indies out for under 160 was great," he said.

The deciding match in the series is on Wednesday, also in Antigua.

"Winning these matches is important - it gives you confidence, if anything else. These guys will be going to the World Twenty20 in a couple of weeks.

"The win builds confidence and gives you self belief. Even if it's an inconsequential series, it's a victory. They go into the next match on Wednesday knowing they can win the series."

West Indies made 269-6 on Friday, but two days later were reduced to 30-3 before being bowled out for 159 at the Sir Vivian Richards Stadium.

Lancashire spinner Stephen Parry, representing England for the first time in any format, took 3-32, while Joe Root and James Tredwell both took two wickets, with one apiece for Broad, Moeen Ali and Tim Bresnan.

"We had a nice start, then a little wobble, but we got over the line in," added Broad.

"The spinners picked up a lot of wickets and looked hard to score off, which creates pressure. We're on a new wicket on Wednesday and we'll have to adjust to that.

"It showed why Ravi's batting at seven, we know he's a strong finisher and it was great to see him take that responsibility on. We just took it five runs at a time - if you're chasing 60 you think it's a lot, if you're chasing five it's easier to chase it down."

Losing captain Dwayne Bravo was unhappy with his side's innings.

"It was a poor batting display - that's two games in a row now," he said. "I expected better. Losing early wickets makes it always difficult for the lower order to catch up. We need to plan in order to bounce back."