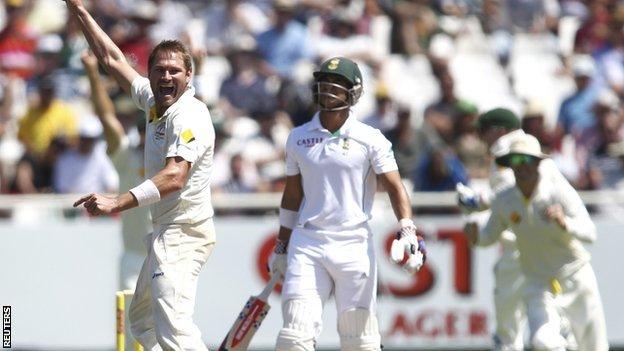 Australia dominated the third day of the third and final Test against South Africa at Newlands to move closer to a series victory.

After declaring on their overnight score of 494-7, the visitors ran through the Proteas for only 287.

If South Africa, number one in the world Test rankings, are beaten, they will suffer a 2-1 loss for their first series defeat since losing by the same scoreline to the same opposition at home in 2008-09.

Indeed, that is their only loss in 25 previous series.

By calling time on their innings after rain curtailed the second day, Australia left off-spinner JP Duminy stranded on a hat-trick.

The visitors then made immediate inroads, Harris having home captain Graeme Smith - who later announced his retirement - caught behind.

Petersen's 53 came from only 63 deliveries, but home wickets were falling with regularity to the Australia pacemen.

After a flat-footed AB de Villiers edged Johnson to second slip and Duminy nicked Harris behind, South Africa were in deep trouble at 146-6.

But Du Plessis found an ally in Vernon Philander to stage a recovery. They added 95 for the seventh wicket, albeit with some good fortune, before Du Plessis hit Johnson to David Warner at point for 67.

Kyle Abbott was bowled by Shane Watson, while Dale Steyn took a blow to the helmet from Johnson before fending the same bowler to first slip for a defiant 28.

When Morne Morkel slashed Pattinson to Watson, Philander was left unbeaten on 37 and South Africa had failed to avoid the follow-on.

Still, Australia chose to bat again, and openers Warner and Chris Rogers will return on day four as the Baggy Greens look to close the Proteas out of the series.