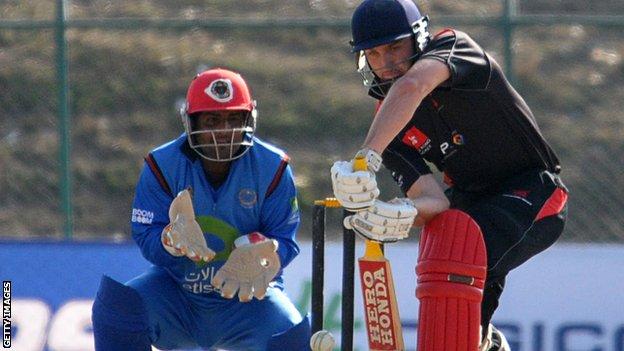 Captain Jamie Atkinson says there will be no pressure on tournament debutants Hong Kong at the World Twenty20.

Hong Kong are part of the eight-team first phase, with two places up for grabs in the second round alongside cricket's biggest nations.

"We have Bangladesh in our group. They are the home team and expected to go through," Atkinson told BBC Sport.

"There is no pressure on us. It's our first time on the world stage so we want to express ourselves."

The 23-year-old wicketkeeper, who had a short spell with Warwickshire last season, also believes the tournament is an opportunity for the Hong Kong players to earn opportunities in T20 leagues around the world.

He added: "By playing on TV and in front of large crowds, it's a great chance for the lads to put themselves forward.

"They will be knowing that if we have success they can put themselves on the map and maybe gain an opportunity to further their cricketing career."

Hong Kong will line up alongside Bangladesh, Nepal and Afghanistan in Group A, with the winners progressing to a second-phase pool that includes Australia, India, Pakistan and West Indies.

Having beaten Zimbabwe in their opening warm-up game, they face Nepal in their first competitive match in Chittagong on 16 March.

Hong Kong qualified for their first major tournament in November and narrowly missed out on securing a place at next year's World Cup.

However, they have earned one-day international status until 2018 to cap a rise from the International Cricket Council's World League Division Four that was aided by a small group of players being made full-time professionals in April 2013.

"We're training four or five times a week then playing games at the weekend," said Atkinson, who was born in Hong Kong to English parents. "We can also get away on tour whenever we're needed."

However, the success of his side has come despite a pool of only 400 players and three grass wickets in the country.

"It's hard to prepare in Hong Kong, both because of the facilities and the size of the grounds," said the right-handed batsman.

"We're quite proud because the facilities that we have can't compare to the other top ICC associate nations."

Although high land prices in Hong Kong means that Atkinson's Kowloon CC is one of the most valuable grounds in the world, the country does not have a stadium that meets the ICC's criteria to host international matches.

There are plans for Hong Kong to play their home games across the Chinese border in a 10,000-seater stadium in Guangzhou.

"There's been a big push to get more cricket in China," said Atkinson. "If we can play some one-day internationals in China, it not only helps us but also spreads the game there."