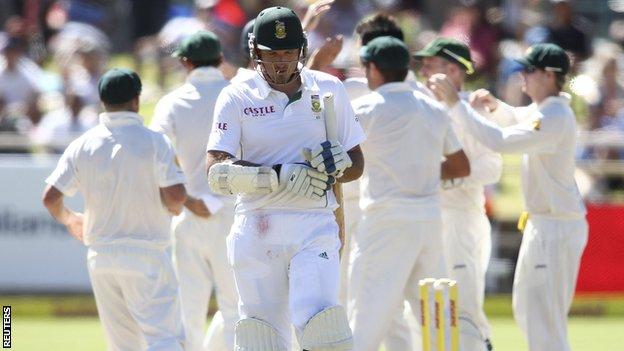 Graeme Smith appears destined to be defeated in his final Test before retirement as Australia closed in on a series victory against South Africa.

The Proteas, chasing 511 for victory, were reduced to 71-4 in their second innings by the end of the fourth day.

Smith, who announced his imminent international retirement on Monday, scored three runs before being caught at short-leg off Mitchell Johnson.

Alviro Petersen, Dean Elgar and Hashim Amla were also out before the close.

It means South Africa, who are ranked number one in the world Test rankings, face a huge battle to avoid their first series defeat since losing to Australia at home in 2008-09.

With the three-match series locked at 1-1 heading into this match in Cape Town, Australia have bounced back brilliantly from their 231-run defeat in the second Test at at Port Elizabeth.

Resuming their second innings on 27-0 with a lead of 234, Michael Clarke's men dominated the Proteas bowling attack.

Belligerent opener David Warner led the way as he bludgeoned 145 from 156 balls to score his second century of the match and take his runs total in the series to 543 at an average of 91.

Warner received support from Chris Rogers (39) and Steve Smith (36 not out), but was the dominant figure in all his partnerships as he scored nearly half his side's runs before edging a Kyle Abbott slower ball behind.

Australia eventually declared on 303-5 from just 58 overs, giving the hosts six overs to bat before the tea break.

In that time, the tourists picked up three wickets for just 15 runs as new-ball pair Ryan Harris and Johnson ripped through the top order.

First Petersen was trapped in front by Harris before Smith fended off a fast, rising delivery from Johnson to Alex Doolan at short-leg.

It was a tame way for Smith's 205th Test innings to finish but it encapsulated his poor form in a series in which he has scored just 45 runs in six innings.

The South African captain, who was given a guard of honour by the Australian team as he walked out to bat, bowed out having made 9,265 runs at an average of 48.25 in 117 Tests, 109 of those as captain.

Dean Elgar was bowled by Johnson before Amla, who had shared in a stand of 53 off 184 balls with AB de Villiers, was out leg-before to James Pattinson.

The stout De Villiers had reached 16 from 100 balls when play ended, and South Africa's hopes of avoiding only their second loss in 26 series rest with their wicketkeeper and their last two recognised batsmen, Faf du Plessis and JP Duminy.