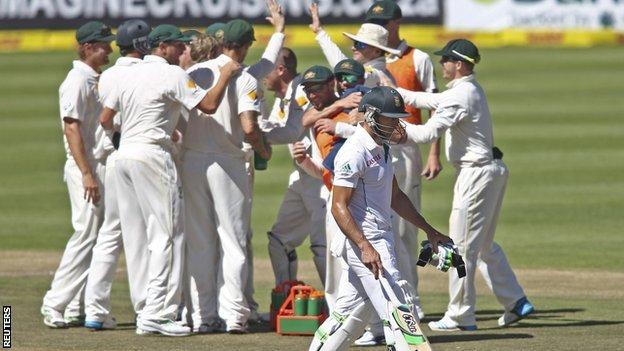 Australia finally broke South Africa's resistance to win the third Test and the series, and send Graeme Smith into retirement with defeat.

But Harris's 4-32 sent the Proteas to a first series defeat for five years.

Mitchell Johnson followed up his destruction of England by taking 22 wickets in three Tests in South Africa. In his last eight matches, Johnson has taken 59 wickets at 15.23.

South Africa were last beaten in 2008-09 by the same opponents and by the same 2-1 scoreline. Still, those defeats by the Baggy Greens are the only two series that Smith's side have lost in their past 26.

However, the world number ones came so close to escaping with a draw that would have mirrored their memorable escape in the second Test in Adelaide in 2012, when Du Plessis compiled a marathon rearguard century on debut.

On this occasion, De Villiers batted more than five hours for his 43, initially supported by nightwatchman Kyle Abbott, who used up 89 deliveries.

When he was bowled by James Pattinson, De Villiers was joined by Du Plessis and the two contenders to replace Smith as captain took South Africa to the second new ball.

It was then that Harris found De Villiers' edge, but still more South African fight would come in the shape of Duminy.

However, when Du Plessis was trapped leg before for 47 by a lovely leg-break from Steve Smith, South Africa had only three wickets with which to negotiate the final session.

Duminy then clipped Mitchell Johnson to leg slip for 43 and the game looked up.

Yet, Dale Steyn joined Philander to further frustrate the Australians and send the game into the final hour.

Emotions came close to boiling over when Philander was reprieved on review despite gloving Johnson to short leg. The ball brushed Philander's thumb, but, after countless replays, it was eventually adjudged that his right hand was not in contact with the bat handle.

As the overs ticked down, Australia shuffled their weary bowlers, with little ruffling the ninth-wicket pair as Philander moved to a half century.

But, when Harris got a yorker through Steyn's defences, he needed only two balls to do the same to Morkel to see Australia follow up their 5-0 Ashes win with a first away series win for two years.

Despite the defeat, Smith leaves his side at the top of the world rankings, though their lead has been cut by Australia, who move above India into second.

"The resilience and the courage the guys showed today was immense," said Smith. "To take it as deep as we did was a huge effort for the boys and something I'm very proud of.

"I've always had huge respect for he game and it's great to see the Test format in such good shape.

"It's been a pretty emotional few days. Retiring been on my mind since the beginning of the series, but I kept putting it off. I wanted to do it before the match but my daughter has been in and out of hospital.

"This is where it all began for me many years ago, the people of Cape Town have been so supportive. It felt it was the perfect place to finish my career."

Australia captain Michael Clarke has now seen his side win seven of their last eight Tests after they went on a run of nine without a win in the middle of 2013.

"Graeme has been an amazing player and a fantastic leader for a long time," said Clarke. "The game is a sad place for him retiring."