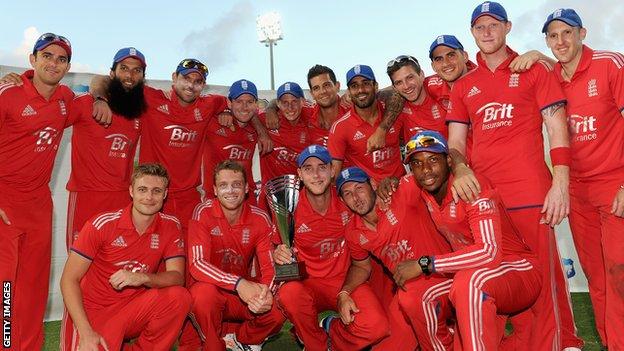 Joe Root scored his first one-day international hundred as England beat West Indies by 25 runs in a gripping contest to win the series 2-1.

Root then struck with his third ball as the Windies slumped to 43-4.

Denesh Ramdin kept the match alive with a superb 128 before Tim Bresnan bowled him to leave the hosts 278 all out.

"Tim Bresnan peeled away to the off side and the whole team mobbed him. I think it was England's first yorker in three games at the death, but after such a torrid winter they bounced back to take the series 2-1.

"It was a fantastic comeback by West Indies, and a great innings by Denesh Ramdin but they were let down by their top order."

Wicketkeeper Ramdin had plundered 14 runs off the previous three balls to raise the prospect of a Windies win, but Bresnan found the ideal yorker length to clatter into leg stump to seal the victory.

England's first limited-overs series triumph since February 2013 brought some much-needed cheer to their supporters after the disastrous Ashes tour of Australia.

Root, who endured a particularly torrid time down under, looked overcome with joy and relief when he reached three figures off his 112th delivery.

Early in his innings, he had required lengthy treatment to his right thumb after being struck by a Ravi Rampaul lifter.

But he ignored the obvious discomfort to work the ball into the gaps for a high-class hundred.

Buttler, who successfully overturned a caught-behind decision on 22 off Marlon Samuels, was characteristically explosive, bludgeoning four sixes and seven fours in his 84-ball knock.

But he fell agonisingly short of a maiden England century when a leading edge gifted Rampaul the easiest of catches off his own bowling.

By then, England had surpassed 300, a total that was always likely to be difficult to chase on a turning pitch, even before West Indies lost two wickets in their first seven balls.

Root's dream day continued as he bowled Kieran Powell with his third ball, the batsman guilty of an ugly slog across the line.

Ravi Bopara took off from short midwicket to claim a fine catch to remove Darren Bravo for 16 off Moeen Ali, then Lendl Simmons chopped Broad onto his stumps to leave the hosts in disarray on 43-4.

Gradually though, they hauled themselves back into contention as first Marlon Samuels (23) and then Darren Sammy (27) offered support to the excellent Ramdin.

Running out of partners, Ramdin took matters into his own hands, taking on the England spinners and bringing up his first one-day hundred during a run of three sixes in four balls.

Sunil Narine kept up the excitement when he pulled Stuart Broad into the stands, but the England captain gained revenge with a sharp piece of fielding to run out Narine.

Needing 40 off the last 18 balls, Ramdin blasted Bresnan for a six and two fours to reduce the equation to 26 off 15.

But after consulting Broad and vice-captain Eoin Morgan, Bresnan came up with the ball to end the match.

After being put into bat, England had made a positive start through openers Moeen and Michael Lumb.

Dwayne Bravo removed Lumb for 20 and Ben Stokes for nought in successive balls, but Moeen and Root swiftly wrested the initiative back England's way.

Moeen (55) showed sublime touch and timing to score his first ODI fifty but when he and the returning Eoin Morgan fell to the spinners to leave England 116-4 in the 24th over, the Windies sensed a chance.

Buttler had other ideas, and together with the courageous Root, laid the foundations for a win that should really have been more resounding than it was.

The first of three Twenty20s in Barbados is on Sunday before both teams head to Bangladesh for the World Twenty20.