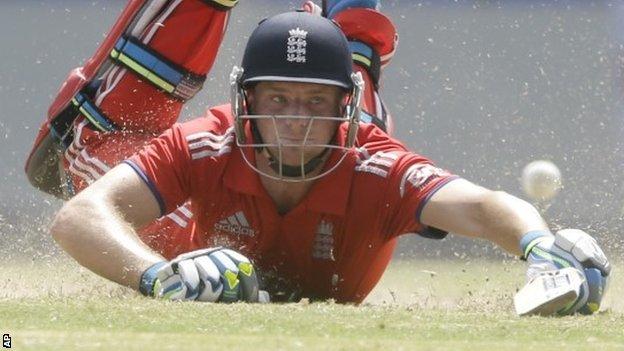 Batting at six, Buttler, 23, scored 99 as England won the third one-day international to clinch the series against West Indies on Wednesday.

"He's one of my favourites. He's one of the finest finishers in world cricket. He looks a class act," Richards said.

Jos Buttler is not ready for the Test side as a keeper or a batsman. Matt Prior has had a poor nine months since New Zealand but he's the heartbeat of the team and a vital batsman at number seven. Jos needs two or three years with Lancashire. I think it could set him back to throw him in now.

Pietersen was released from his central contract in February with England manager director Paul Downton saying the decision was necessary "to rebuild not only the team but also the team ethic" in the wake of an Ashes whitewash.

"I'm just saying it's sad, to prematurely get rid of an individual like that," said Richards.

"There must have been much more in terms of what went wrong. You were looking for some heads to roll, and for some reason, Kevin Pietersen's head was in the way."

Buttler's promotion from the one-day side into the Test side has been suggested as a way of replacing Pietersen's aggression in England's batting line-up.

Pietersen himself suggested on Twitter that Buttler could replace fellow wicketkeeper Matt Prior in the Test side.

Prior was dropped for the final two Tests of England's 5-0 series reverse against Australia after averaging 17.8 in the first three meetings.

Buttler's swift middle-order scoring was a feature of the one-day series that followed with the right-hander top-scoring with 71 in 43 balls in England's only win.

After signing for Lancashire from Somerset in October, Buttler said that he hoped the move would help his chances of international recognition at Test level.