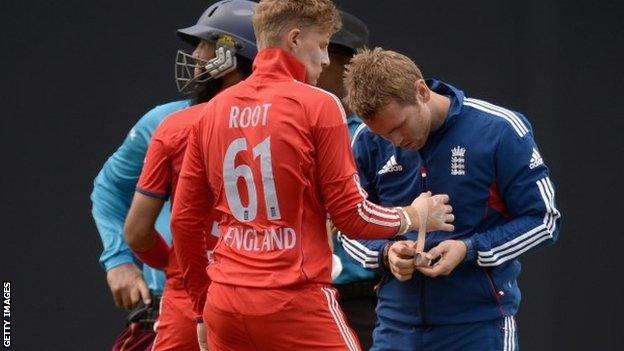 England batsman Joe Root has been ruled out of the ICC World Twenty20 in Bangladesh after fracturing his thumb against West Indies last week.

Root, 23, who is also a frontline spinner in limited-overs cricket, has been replaced by batsman Ian Bell.

Root was struck by the third ball of his innings on 5 March, but went on to make 107 as England won by 25 runs and claimed the one-day series 2-1.

He flew back to England the following day to undergo a scan.

In Root's absence, England suffered a 27-run defeat by West Indies in the first of three Twenty20 internationals in Barbados on Sunday.

Captain Stuart Broad, who aggravated a long-standing knee problem, will miss the final two matches in the series and may need an injection to get him through the tournament in Bangladesh.

The World Twenty20 begins on 16 March, with England taking on New Zealand in their opening match of the tournament on Saturday, 22 March.

The International Cricket Council approved Root's replacement by Bell, who has not played a Twenty20 international since January 2011.

Both have played seven T20 matches in total, with Root's strike rate of 139 superior to Bell's 119.

Root has also emerged as a wicket-taking spinner in the shorter forms of the game for England.

Opening the bowling in all three one-day games against West Indies, he took a combined 4-86 in the three games with a best of 2-15.

Root made his international debut in a Test match against India in Nagpur in December 2012, scoring 73 in his first innings, and has quickly become a fixture for England in all three formats of the game.

No timescale has been put on Root's return, with Yorkshire's County Championship season starting on 13 April.

Meanwhile, England's Ravi Bopara and West Indies' Darren Sammy and Marlon Samuels were fined by the ICC for their conduct during the match in Barbados.

The trio pleaded guilty to trading insults in the 12th over of England's innings. Bopara was fined 25% of his match fee, while Sammy and Samuels were fined 20% and 10% respectively.