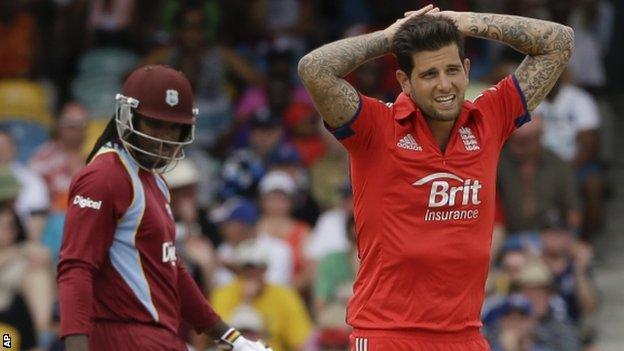 England suffered a heavy defeat by West Indies in the first of three Twenty20 internationals in Barbados.

The tourists paid the price for only picking one spinner as the Windies piled up 170-3 batting first, with Marlon Samuels hitting 69 off 46 balls.

England then laboured to 143-9, with six of the wickets falling to spin at the Kensington Oval in Barbados.

Tim Bresnan top-scored with 47 not out but the tourists never looked like getting close to their target.

The crushing defeat is likely to prompt a tactical rethink from England as they try to hone a strategy for the World Twenty20, which starts in a week's time in Bangladesh.

"It was a complete bowling performance from the West Indies. It was a good knock from Ravi Bopara but he was left so so much to do. England will be saying they really have to work on taking pace off the ball because the West Indies have shown them how to do it."

With Stephen Parry and Moeen Ali both left out, and Joe Root injured, the hosts were left with only James Tredwell to bowl spin, and he showed the value of slow bowlers in the game's shortest format with 15 dot balls in his figures of 4-0-16-1.

England also have a concern over the fitness of captain Stuart Broad, who will miss the remaining two matches in West Indies with a knee injury and may need an injection to get him through the tournament in Bangladesh.

West Indies also have injury worries after spinners Sunil Narine and Samuel Badree limped out of the action, the latter after taking three wickets on his 33rd birthday.

On the ground where England beat Australia to win the World Twenty20 in 2010, the hosts made an electric start as Dwayne Smith smashed Broad's first ball of the innings out of the ground.

The hosts scored 19 off the first over to kick-start a 57-run opening partnership, which was broken when Smith was bowled by a Ravi Bopara slower ball.

Chris Gayle, returning from the back injury that ruled him out of the one-day series, took a few balls to get his eye in, then proceeded to pepper the boundary at will.

He struck five fours and two sixes before he was trapped lbw for 43 by the disciplined Tredwell.

The Kent spinner's only blemish was to drop Samuels at extra cover on 43. The powerful right-hander punished the error by striking the next five balls of Jade Dernbach's over for four to give the Windies' innings a vital late boost.

England's run chase came unstuck in the third over when Alex Hales and Luke Wright were stumped in successive balls from leg-spinner Badree.

Hales was out by a distance after charging down the wicket, while Wright fell to a marginal decision given by the television umpire.

Michael Lumb was caught on the boundary for 18 trying to hit a six into the wind and Jos Buttler gifted an easy catch to short third man to leave England in disarray on 40-4.

Samuels then accounted for Eoin Morgan (19) and Ben Stokes, who was the third England batsman to be stumped when he tried to clatter the ball out of the ground.

As so often seems the case, it was left to Bopara and Bresnan to try to dig England out of a hole.

But when Bopara was caught and bowled by Dwayne Bravo for 42, Broad and Tredwell soon followed to leave Bresnan with an impossible task.

England will be seeking a vastly improved performance in the second contest on Tuesday as they gear up for their first game of the World Twenty20 against New Zealand in Chittagong on 22 March.