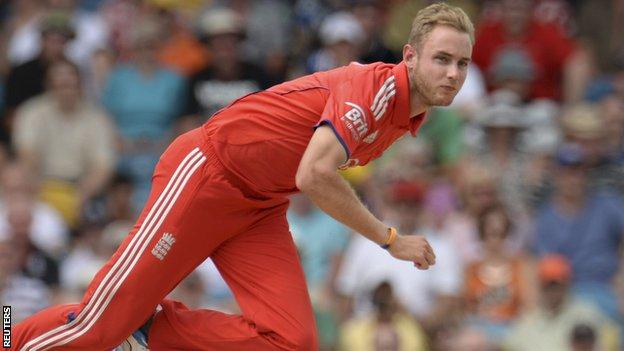 Broad, who is suffering from patellar tendonitis, may need an injection to get him through the upcoming ICC World Twenty20 tournament in Bangladesh.

He aggravated the condition during Sunday's 27-run defeat.

England have two more games in Barbados on Tuesday and Thursday. Their first World T20 game is against New Zealand in Chittagong on Saturday, 22 March.

Vice-captain Eoin Morgan will lead the side in Broad's absence.

"I've had a patellar tendonitis problem in my right knee for quite a long time," explained Broad, 27, who played more international matches on the recent tour of Australia than any other England player.

"With the workload I've had all winter, I've not really had any breaks, so it's got worse and worse.

"I just caught my knee in the sandy ground at Antigua and got a lot of inflammation and fluid on it. It was touch and go today, but I won't be playing the next two games and I'll have to have some kind of injection to get me through the World Twenty20, I'd think."

The West Indies won the toss and scored 170-3 in their 20 overs before restricting England to 143-9.

Broad added: "It was probably a par score by West Indies. We were relatively happy with 170 as 165 is the average score here.

"It was a decent toss for them to win and we never got going with the bat.

"We didn't play the spin particularly well, but that shouldn't take away from how we've developed over the last couple of weeks.

"It's something we can work on, although we've not got a lot of training time between these two games."

Broad also conceded that England were "maybe a slow bowler short" in their attack.

"The pitch was very different to when we played here a couple of years ago," he said. "It was better for the slower bowlers.

"Looking at all the seam bowlers, I don't think anyone went for under eight an over or took a lot of wickets, while the spinners had low economy rates and took wickets."

West Indies captain Darren Sammy revealed that spinner Sunil Narine - the world's top-ranked T20 bowler - will require a scan on a leg injury that forced him off the field after bowling two overs.

"Our physio is monitoring it very closely," said Sammy. "So far from his reports, it doesn't look like ligament damage but he will go for a scan and we will see how serious it is."

Sammy believes Narine and leg-spinner Samuel Badree, who took 3-17, could be crucial to the Windies' chances in Bangladesh.

"Narine is world class and Badree is one of the most economical spinners in the world," said Sammy. "Myself and Ravi Rampaul come in and chip in with a couple of overs but we build the innings around Narine and Badree.

"Whatever the ground and pitch, Twenty20 cricket has shown spinners are the most effective. If you have a good fast bowler who can bowl a good two overs at the start and good yorkers at the end, you are lucky, but most of the time, the spinners are key players."