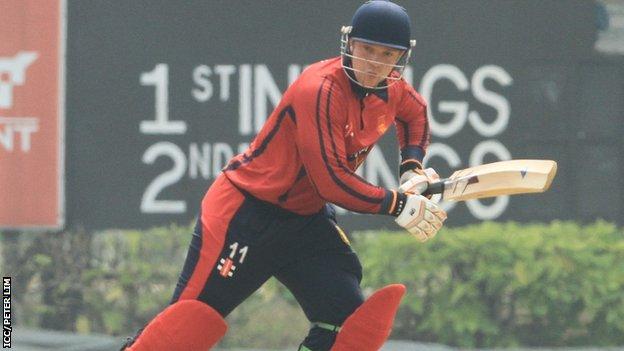 The victory was Jersey's fourth in a row at the tournament in Malaysia and guaranteed that the Channel Islanders will finish in the top two.

Jersey totalled 279-6 batting first and then bowled out the Caymans for 157.

They will go on to compete in Division Four in Singapore in June against the likes of Oman, Italy and Denmark.

Division Four is the highest level at which Jersey have ever competed, but they have not done so since 2008.

The match against Cayman Islands at the Bayuemas Oval began badly for Jersey as openers Nat Watkins and skipper Peter Gough were out for one and nought respectively off the bowling of Troy Taylor.

All-rounder Ben Stevens revived Jersey by hitting 79 from 95 balls before wicket-keeper Ed Farley made an unbeaten 86 as they added 116 runs from the final 10 overs of the innings to set a daunting target.

Cayman Islands slumped to 61-7 in reply, but Conroy Wright showed some resistance with an unbeaten 79 and shared a last-wicket stand of 57 with Alassandro Morris before the latter was caught by Stevens off the bowling of Tom Minty for 13.

The promotion, with a match to spare, was Jersey's second in a row after they

"Tactically there are parts of the game we have to improve," Gough said afterwards.

"We've got to improve our batting and bowling skills at the same time, and our fitness if we want to do well in Division Four."

In Monday's other matches Guernsey suffered their fourth consecutive defeat at the tournament, losing to hosts Malaysia by 63 runs. Elsewhere, Tanzania narrowly overcame Nigeria by 10 runs.