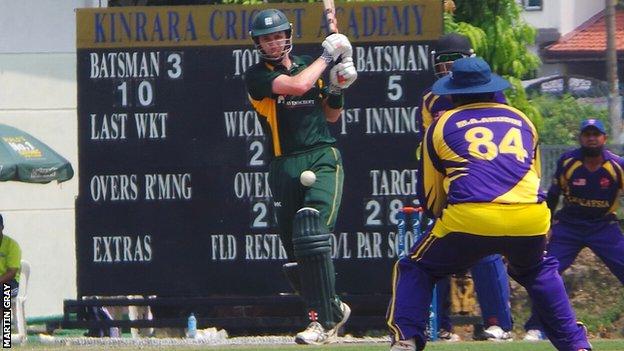 Guernsey Cricket Board CEO Mark Latter says the poor showing in Malaysia is a temporary blip in their development.

Nic Pothas' team have lost all five of their games in Division Five of the ICC World Cricket League and have been relegated to Division Six as a result.

A one-wicket defeat by rivals Jersey,who have earned promotion to Division Four, on Wednesday was the latest blow.

"We've got to take that step back now to take two steps forward in the future," he told BBC Guernsey.

"We know we're not a million miles off and we also know why we're not there which is handy because it means you can fix it."

Guernsey have one game left against the Cayman Islands before returning home.

"Against Jersey we were in the game for large parts - if you look at the stats between the two sides, Jersey are a couple of years ahead of us in terms of the development but we matched up," he said.

"So we know our basic skills are there or thereabouts and what we have to do is provide them at the critical moments and more consistently.

"That's been the pattern across all the games - we can sit here and say we left 30 runs out there with the bat and lost things in the field."