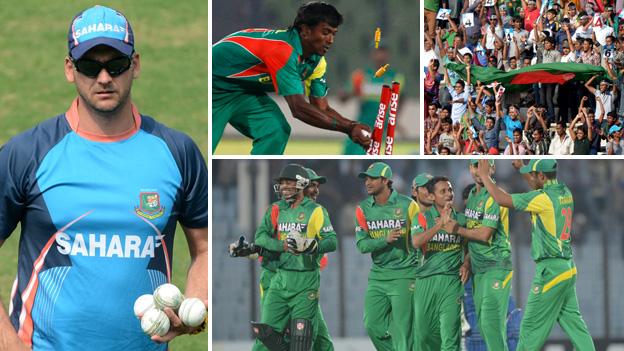 A nation's eyes will be on Bangladesh when the ICC World Twenty20 gets under way on Sunday.

The hosts open the tournament against Afghanistan, giving them an immediate chance to avenge their defeat by the qualifiers in the Asia Cup, a tournament in which they lost all four games.

But Bangladesh's Australia-born coach Shane Jurgensen tells BBC Sport why he believes his side could shock the bigger nations.

What went wrong in the Asia Cup?

Some of our experienced players were missing through injury and we had guys that were coming back in to the team that hadn't played cricket for a while.

We lost matches from strong positions and haven't been able to nail the opposition; we lost the momentum in games.

Because of this we have created pressure on ourselves and allowed teams to get back in to the game.

Will you be looking for revenge against Afghanistan?

We want to have a good strong performance to set the record straight.

Hopefully we can gain a bit of momentum from our two warm-up wins.

We can be a streaky team but when we get confidence and suddenly start winning matches, anything can happen. We've seen that when we beat New Zealand 3-0 in the one-day series.

How much do you know about Hong Kong and Nepal, who are also in your group?

Afghanistan is the crunch game but they're all going to be tough because Hong Kong beat Zimbabwe and Nepal were competitive against Ireland.

I have watched Hong Kong and Nepal on video. They have some really good spinners who performed well against Ireland.

It will be very important to adapt during the games and make up plans to counter their tactics as quickly as we can.

That's the major difference with playing these teams compared to a team like Australia, who we have played against and seen plenty of on TV.

Where can your team improve?

It is vital that we execute the three disciplines extremely well. In the Asia Cup we didn't get that complete team performance.

Our fielding has been fantastic of late but for some reason we have started dropping a few catches, and we started losing wickets at critical times.

We also gave away too many boundaries when we were bowling and failed to create pressure.

In each game we get one thing right but not all three.

What is the latest injury situation?

Thankfully, I have a fully-fit squad and it was great to see Tamim Iqbal coming back from injury and making a quick 40 against the UAE. He got injured in training when he pulled a ball and freakishly hurt his neck.

Mashrafe Motatza has a side strain but should be fit and ready for Afghanistan.

Captain Mushfiqur Rahim is also fit after a shoulder injury, which is great news because he is a brilliant wicketkeeper and an excellent all-rounder.

Rubel Hussian had a serious shoulder injury last year and our physio says it could take up to two years for him to get back to his best.

But it was so exciting to see him bowl against New Zealand. He was the quickest bowler of the series and has an unique action. Although Rubel might go for runs, he can also take crucial wickets. He has worked hard on his yorker and is executing it much better now.

The fact we only played nine ODIs last year may have contributed to our injury problems. In contrast, Sri Lanka played 30 ODIs and India 33, while New Zealand played 19.

If we could play more international cricket at that intensity, it will improve our injury problems because our players will be used to playing more regularly.

Talented all-rounder Sohag Gazi has been misfiring recently. What has gone wrong?

Sohag has had some ups and downs but the next 12 months are crucial for him to improve his consistency.

He came in to international cricket with a bang in October 2012 and had a tough time in the middle of last year.

But he came back really strongly against New Zealand in the latter part of 2013 and took a hat-trick and scored a century to become the first player to do so in a Test.

He's a good batsman, bowler and fielder. He can hit the ball very powerfully and has a unique bowling style, which has helped him.

He's quite an open-chested off-spinner and has some secret variations, but his consistency must improve.

How is living and working in Dhaka?

I have been surprised by how much love there is for cricket. Every time we arrive back at our team hotel from training there are always hundreds of fans waiting to get a glimpse of the team.

What I also really enjoy about Bangladesh is that there are so many people having a go, and that's something I like.

You'll see an older gentleman serving cups of tea, biscuits and bread on the side of the road, and there are so many people like that just trying to earn a living by working hard.

The other bits I enjoy are when we have left Dhaka and visited other parts of Bangladesh. It's nice to get away from the city and see the countryside.

Bangladesh is certainly different from where I come from. When I go home to my house in Australia, which is in a very quiet cul-de-sac, and have coffee with my wife and kids, it can feel deathly quiet and strange because I have got used to hearing the tooting horns all day and night in Dhaka.

How have the team developed since you took over - and what more can be done?

Who is Shane Jurgensen?

Playing Test cricket and having to execute good basics under pressure over five days has helped improve our ODI and T20 performances.

When we have had success the expectations have gone through the roof, which is fine and fair enough. But having big gaps between series has not been helpful. We've also been hindered by the weather during the monsoon season.

But it's important we continue to play more Test cricket to put the guys under more pressure, and it would be great for us to play 20-25 ODIs over the year.

I think that would fast-track our level and help the academy bring through more players. We are developing new programmes to ensure the guys are eating and preparing well to play at the highest level.

What do you think of the sweeping changes to Test cricket set to be introduced in 2015?

It wasn't really the best timing for us when they [the International Cricket Council] announced that on the eve of our Test against Sri Lanka.

It affected my guys a lot to know that potentially they could have been playing their last official Test.

I just hope that it works out best for everyone. It is crucial because there are so many people who play this game and love this game and I'd hate to think that interest in such a great game would be affected.

It took a long time for other powerful cricketing nations to make their mark from when they started, so we need the same chances to keep improving.

The tough losses can only make us better and can make the guys mentally stronger.

Who are your favourites to win the World T20?

Sri Lanka, Pakistan, and India will have an advantage because the tournament is being held in Asia.

Australia might be a surprise package but you always have to be wary of West Indies. They have powerful hitters who can take the game away from you.

England have a great chance and Jos Buttler is an exciting and dangerous player. They can also draw on the experience of winning the tournament in 2010.

I remember England had a poor start to that tournament but managed to turn it around and get through. All of a sudden they got momentum and went on to win.

We haven't had the best of luck this year but we are aiming to get back to winning ways in an important tournament.

We need have an aggressive mindset, and if we can qualify from our group then anything is possible.

A solid partnership or a decent innings can win you the game. That's the beauty and also the dangerous part of Twenty20.