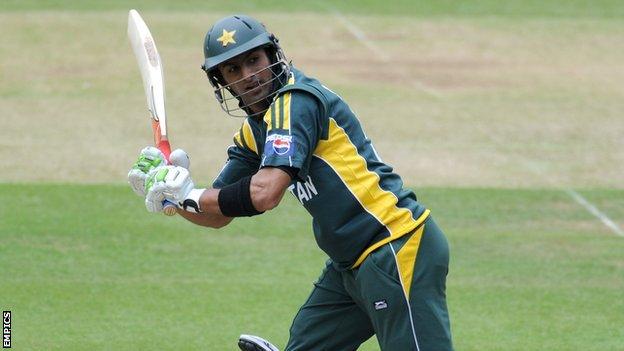 Pakistan all-rounder Shoaib Malik has signed a six-match deal to play for the Birmingham Bears in this summer's T20 Blast.

Malik, 32, will both start and end his spell with the Bears with games at Edgbaston on 19 June and 8 July.

"I've very excited to have signed for a huge club like the Bears," said Malik.

"Hopefully, I can make an important contribution in my time at Edgbaston that helps the Birmingham Bears be successful in this competition."

Malik, who has captained Pakistan in all formats of the game, has played in 55 international T20s and 216 one-day internationals, as well as 32 Test matches.

He recently played in the inaugural Caribbean T20 Premier League for the Barbados Tridents, finishing as the tournament's top scorer with 272 runs.

Malik, who also played in Australia's Big Bash for the Hobart Hurricanes, has experience of playing in England with Gloucestershire in 2003 and 2004.

"I enjoyed my short stints with Gloucestershire and sadly I haven't been able to play county cricket since then because of my Pakistan commitments," added Malik.

His debut for the Birmingham Bears will be against Northants Steelbacks, with his final action set to be against the Nottinghamshire Outlaws.

"Shoaib has proven himself as a world-class all-rounder on the international stage and in some of the world's biggest T20 competitions," said Warwickshire director of cricket Dougie Brown.

"Bolstering a strong squad with Shoaib's experience is an exciting proposition for the team as we look to progress in the new-look tournament, hopefully to finals day in front of our home fans at Edgbaston."

The Bears, who have not reached a finals day since the inaugural year of the competition in 2003, will play seven home games in this year's revamped tournament, starting against Yorkshire on Friday, 23 May.