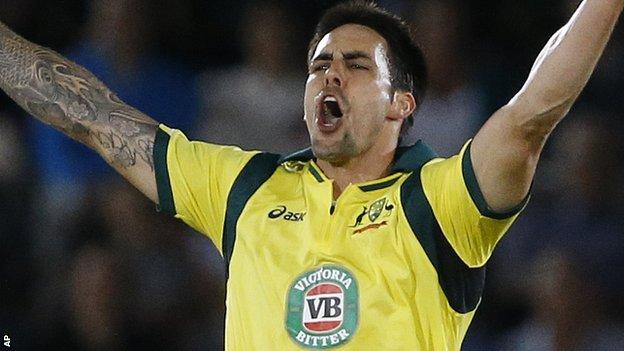 Australia fast bowler Mitchell Johnson has been ruled out of the World Twenty20 with a toe infection.

The left-armer will be replaced by Doug Bollinger, also 32, who last appeared for Australia in October 2011.

Johnson was instrumental in Australia's Ashes whitewash of England and the 2-1 Test win over South Africa.

"It was anticipated that Mitch would have a significant impact with his pace and menace," said Australia chief selector John Inverarity.

"Doug has had significant experience in the sub-continent and in international white-ball cricket and his ability to bowl with good pace was a factor in his selection."

Johnson's 37 wickets in the 5-0 victory over England saw him named Australia's cricketer of the year in January, and he followed that up by taking 22 wickets in the 2-1 Test series win in South Africa.

"Mitchell had a cut on his right big toe after the third Test against South Africa which became infected when he returned home," said Cricket Australia chief medical officer Justin Paoloni.

"We have given him as long as we can but unfortunately his infection hasn't responded to the treatment as quickly as we had hoped with swelling remaining in his toe and foot."

The World T20 gets under way on Sunday, with hosts Bangladesh opening the tournament against Afghanistan.

Australia begin their campaign against Pakistan in Mirpur on 23 March, while England face New Zealand in their first fixture the previous day.