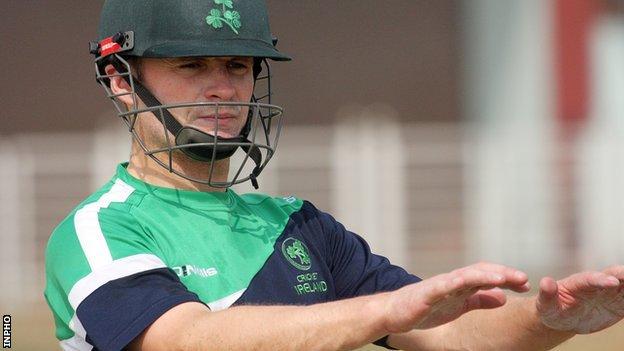 Captain William Porterfield says Ireland must win all their group games if they are to progress in the World Twenty20 in Bangladesh.

The winners of each of two initial groups will qualify for the Super 10 phase featuring the major teams.

Ireland face Zimbabwe in Sylhet on Monday, before playing the United Arab Emirates and the Netherlands.

"We are going to need three wins to progress out of the group stages," said Porterfield.

"It would be good to get off to a winning start and take that momentum into the tournament."

Ireland coach Phil Simmons coached Zimbabwe from 2004 to 2005, and Porterfield said: "His knowledge of Zimbabwe cricket and particular individuals is going to be crucial."

Ireland play all their Group B matches in Sylhet, a new stadium in the north-east of the country built for the World T20.

"It's a new stadium, it's the first time we've all been here and it looks like an impressive setting - a very nice ground," said Porterfield, whose side beat Nepal and lost to Bangladesh in their warm-up games.

"It's also a new pitch and maybe not a typical sub-continent one - it might have more pace than we are used to.

"We'll have to assess the conditions pretty quickly, but the fact that we have three bowlers in our top six or seven batters makes a big difference.

"That leaves us with five or six potential seamers and a few spinners, which is a good position for any team to be in.

"Our batting goes well down the order too, so we have a few selection decisions to make, which is a good thing."

After playing Zimbabwe, Ireland face the UAE on Wednesday and the Netherlands on Friday.