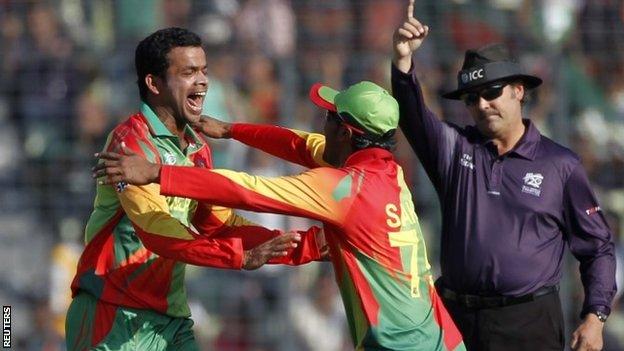 Bangladesh crushed Afghanistan by nine wickets in the opening match of the World Twenty20 in Mirpur.

Afghanistan recovered from losing Mohammad Shahzad to the first ball of the match with Gulbadin Naib hitting a run-a-ball 21 to move them onto 36-1.

But Shakib Al Hasan (3-8) dismissed Naib and Najeeb Tarakai in successive balls and a run-out saw them slump to 36-4 before they limped to 72 all out.

Anamul Haque top-scored with 44 as Bangladesh won with six overs to spare.

The opener hit the third six of his innings to seal victory as the hosts posted 78-1 at the National Stadium and avenged Bangladesh's defeat by Afghanistan in the Asia Cup this month.

The second Group A game was equally one-sided, with Nepal beating Hong Kong by 80 runs in Chittagong as both sides made their international tournament debuts.

Nepal scored 149-8 after being asked to bat first, as Gyanendra Malla top scored with 48 from 41 balls, including four fours and a six.

Waqas Barkat (18) and Babar Hayat (20) then steadied the ship as Hong Kong reached 58 for 3 after nine overs.

Fellow left-arm spinner Shakti Gauchan finished with 3-9 as Hong Kong collapsed to 69 all out in 17 overs, having lost their last seven wickets for just 11 runs.

The winners of Group A will join West Indies, India, Pakistan and Australia in Group 2 for the Super 10 round-robin section of the tournament.

Ireland play Zimbabwe on Monday in the opening Group B fixture, with Netherlands and United Arab Emirates following later in the day.

The Group B winners go into Group 1 with Sri Lanka, England, South Africa and New Zealand.