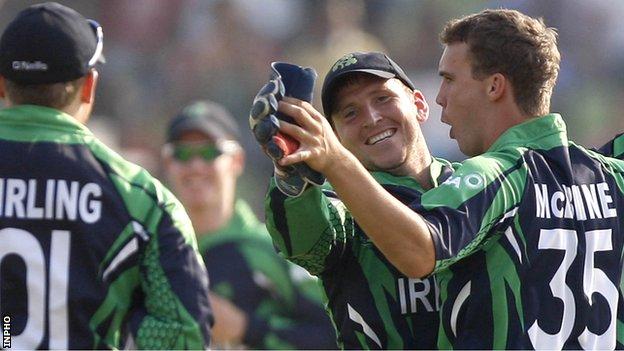 Ireland clinched a dramatic last-ball win over Zimbabwe in their World Twenty20 opener in Bangladesh.

Zimbabwe were going at almost 10 runs an over before eventually posting 163-5 from their 20 overs.

Paul Stirling's 60 off 34 balls put Ireland in control as they entered the final over needing four runs to win.

But, after losing two wickets, Stuart Thompson needed to scamper through for a single off the final ball to give his side a three-wicket victory.

It is the second time Ireland have upset a Test nation on St Patrick's Day, having beaten Pakistan at the 2007 World Cup.

Ireland appeared to be cruising towards their target of 164 after opener Paul Stirling's explosive start.

The Middlesex right-hander hit nine fours and a six as he and captain William Porterfield (31) put on 80 for the opening wicket.

Tinashe Panyangara brought Zimbabwe back in the game with two wickets in the 15th over.

The swing bowler, who was taken for 18 in his first over by Stirling, also dismissed the dangerous Kevin O'Brien before returning to deliver the final six balls with Ireland needing just four for the win.

Ed Joyce fell to Panyangara and Max Sorensen was run out off successive balls as Ireland looked in danger of throwing victory away.

But Thompson managed to scamper a bye off the last delivery as Zimbabwean wicketkeeper Brendan Taylor missed a run out.

Earlier, Taylor had hit six fours and two sixes as he scored 59 off 46 balls for Zimbabwe after his side were asked to bat.

Elton Chigumbura hit 22 off 13 balls, including two sixes in the last over, to take Zimbabwe to a competitive total after spinners George Dockrell (2-18) and Andy McBrine (2-26) restricted them in the middle overs.

In the other Group B game, the Netherlands chased a target of 152 with seven balls to spare to seal a six-wicket win over the United Arab Emirates in Sylhet.