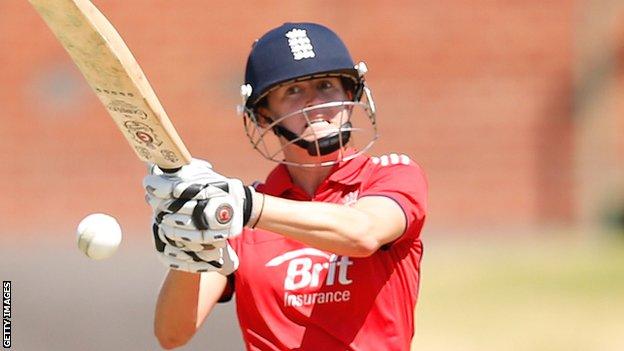 England edged past Pakistan by two wickets with one ball to spare in Savar in their first warm-up game ahead of the Women's World Twenty20.

Pakistan won the toss but, before there was a run on the board, they lost both openers to off-spinner Danielle Hazell, who took 2-3 from two overs.

After skipper Charlotte Edwards made 21 at the top of the order, Greenway had looked set to steer England to victory when only 16 runs were needed from the last three overs with the experienced left-hander well set.

All group matches played in Sylhet

But Greenway and Georgia Elwiss fell to successive deliveries from Asmavia Iqbal and Fran Wilson became Sumaiya Siddiqi's third victim in the next over.

But seamer Siddiqi, who had earlier removed top-order pair Heather Knight and Sarah Taylor cheaply, sent down two wides before Shrubsole hit her last two deliveries for two and four.

Hazell and Shrubsole took four singles off the first five balls of the last over, bowled by Qanita Jalil, to complete a tense victory.

Earlier, Hazell struck with the new ball to give England a great start but Dar led Pakistan's recovery, before opting to retire with two overs left.

With all 15 members of squads able to feature in these warm-up games which do not have official international status, England used eight bowlers including uncapped pair Jodie Dibble and Rebecca Grundy, while Amy Jones - usually England's second-choice wicketkeeper - also bowled an over.