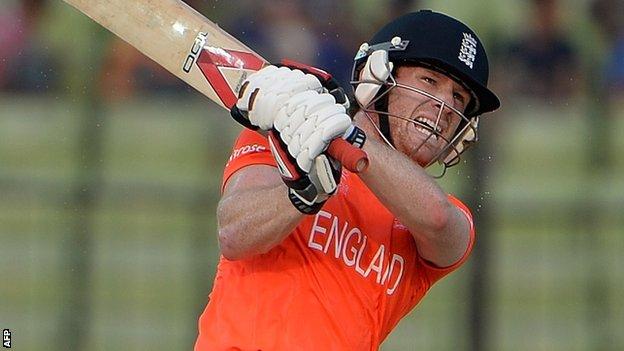 Captain Eoin Morgan denied that a shortage of sixes was England's biggest concern going into the World Twenty20.

England only cleared the ropes once as they were thrashed by seven wickets in their penultimate warm-up game by a West Indies team that hit five sixes.

"You can never just concentrate on hitting sixes. Getting fours is more important. Around 82% of games are won by the side who hit the most fours."

England's tally of 16 fours in their modest 131-7 was four more than the Windies in Fatullah, Bangladesh.

Morgan, standing in for injured skipper Stuart Broad, top-scored for England with 43 not out.

But Chris Gayle bludgeoned an unbeaten 58 off 38 balls as the Windies coasted to their target with 23 balls to spare to condemn England to a sixth defeat in seven T20 games.

"We never put ourselves in a position to take their bowling on," said Morgan. "We found it a bit of a stuttering innings today.

"We were a bit short of par and, given the start the West Indies got, we were staring down the barrel a little bit. It was just tough to get going."

England play India on Wednesday in their final warm-up match before their first game of the tournament against New Zealand on Saturday.

England at the World T20

Morgan added: "We're coming up against a very good India side who have similar skills to the West Indians.

"They will go in as favourites but if we perform there's no reason why we shouldn't win."

Morgan struck three fours and England's only six in his 42-ball innings, but he lacked support from the other England batsmen, with only Moeen Ali (22) passing 20.

Gayle and Dwayne Smith (36) put on 78 in 8.3 overs for the Windies' first wicket to leave the result in little doubt before Lendl Simmons cracked 15 off five balls to round off an emphatic victory for the defending champions.

In Tuesday's other warm-up game in Fatullah, South Africa beat Bangladesh A by five wickets.

The top two from each Super 10 pool will reach the semi-finals.