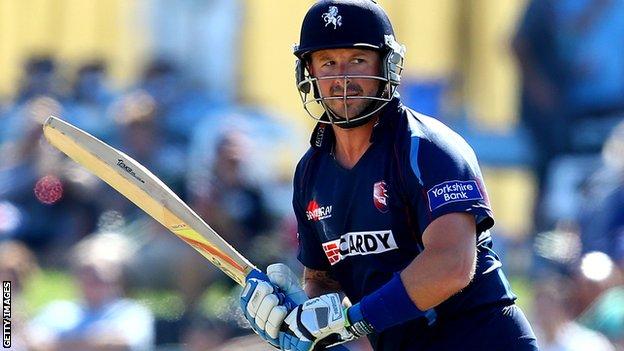 Kent captain Rob Key says Darren Stevens deserves credit for the way he handled himself after being charged by the International Cricket Council.

The 37-year-old all-rounder was charged with failing to report a corrupt approach last August.

However, Stevens was cleared of any wrongdoing by a tribunal last month.

"To play the way he did with the cloud he had hanging over him was true testament to what he is about," Key told BBC Radio Kent.

He added: "Many a player would have crumbled with the news he heard and what he went through. But actually it raised his game a huge amount."

With the way Darren thought about his cricket and the way he played at the end of last summer, I think you can already see he wants to continue in that vein

Stevens finished last season as Kent's top run-scorer in the County Championship, his 1,268 runs in Division Two coming at an average of 63.40.

The former Leicestershire man's ICC charge related to an alleged match-fixing conspiracy in the Bangladesh Premier League, where he had played for Dhaka Gladiators.

Stevens remained eligible to play in all forms of cricket and scored two half-centuries, a century and an unbeaten double ton in Kent's last five four-day games of the campaign.

After scoring 205 not out to help Kent to victory against Lancashire in the final game of 2013, Stevens admitted he could have played his last innings.

He could have been banned from playing for up to five years but, after being found not guilty, is now preparing for his 18th season of his county career.

"The way he finished last summer was the best he has ever played, certainly with the bat," batsman Key, 34, added.

"He has been a brilliant player for us for a long time and his bowling has come of age over the last few years. Last year with the bat he was exceptional.

"He is playing his best cricket now at the back end of his career, which is brilliant for us."