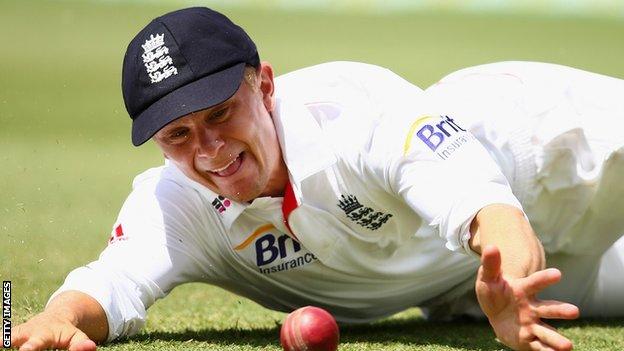 Durham leg-spinner Scott Borthwick says it is up to players like himself and opening batsman Mark Stoneman to take more responsibility when they defend their County Championship title.

Financial restrictions forced the county to release several senior players over the winter.

"I have a more senior role now, and it's time for the likes of myself and Mark to step up," Borthwick said.

"Last season was good for me and, of course, it was for Durham as well."

Borthwick, 23, who made his England Test debut against Australia in January, began the winter playing grade cricket in Sydney and was planning for England Lions' January tour to Sri Lanka when he got a late call to join the ill-fated Ashes series.

"It all changed in late December when I got called up for the Ashes, which was an unbelievable feeling," he told BBC Radio Newcastle.

"It was a shame about the result when I played in the Sydney Test [England lost the fifth Test by 281 runs] but just to be part of it and everything I learned was fantastic."

Currently the club are preparing for their trip to Dubai to play the MCC starting on on Sunday, 23 March - the fixture which traditionally marks the start of the domestic season.

"Our preparations last season were very different - we went to Scotland and walked up a mountain in the snow - so hopefully getting some sun on our backs will have us raring to go," Borthwick said.

In the absence of regular captain Paul Collingwood, who has a coaching role with the England Twenty20 side during the current World Twenty20, Durham will be captained by 26-year-old Stoneman.

New Australian overseas signing John Hastings will join the squad in late May or early June and his arrival will some variety to the Durham attack, according to head coach Jon Lewis.

"Primarily he's a seam bowler - a quick bowler - and a little bit different from the seam attack we have," Lewis said.

"We have some excellent bowlers, but guys like Mark Wood, Graham Onions and Chris Rushworth don't really bring height, and John is a good two metres tall.

"He's got very good skills at one-day cricket - his Big Bash record this year was top drawer - and I was a little bit surprised he wasn't picked for the Australian T20 side to be honest, but quite pleased too."

Lewis added: "We're going to be up against one of the strongest MCC sides I've seen for a few years.

"It's going to be tough, and we're looking to win the game, but the primary objective is being ready to play Northants on 13 April."