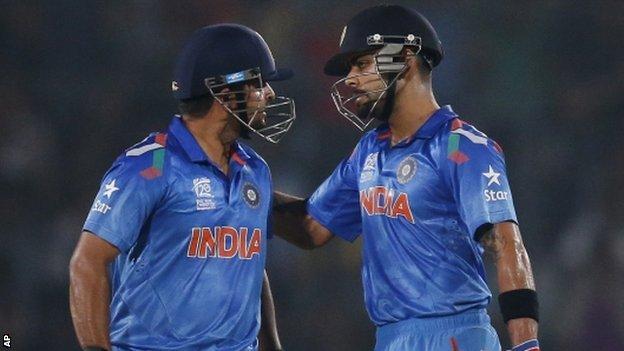 England's stuttering form continued as they lost to India by 20 runs in their final warm-up match before they start their World Twenty20 bid in Bangladesh.

Stuart Broad put his troublesome knee through two overs as fifties from Virat Kohli and Suresh Raina helped India recover from 39-3 to 178-4 in Mirpur.

England faded after a flying start with the bat, finishing on 158-6, with Moeen Ali top-scoring on 46 off 38 balls.

England face New Zealand in their first group match in Chittagong on Saturday.

England's seventh defeat in eight Twenty20 matches further lengthens their odds of success in a tournament they won in 2010.

Having reached 43-1 after five overs, they became bogged down against the spinners, with stand-in captain Eoin Morgan only managing 16 off 16 balls.

Moeen did not find his range until the task was all but impossible and despite Jos Buttler's late 30 off 18 balls, England finished well short.

"We kept coming at them but never managed to get it away so it was disappointing," said Morgan, whose side were thrashed by West Indies on Tuesday.

"But things are a bit clearer now, which is good going to Chittagong tomorrow. Our batting order is strong enough to compete with anything, especially on a good wicket like this one here."

England had India 39-3 after the six-over powerplay, but Kohli (74 not out) and Raina (54) mixed clever placement and occasional blasts of power to post an imposing score.

England were permitted a 12th man to allow Broad to test his knee and the regular skipper bowled with pace in a 12-ball spell that cost 14 runs.

However, the rest of the pace attack struggled to restrict India's scoring, with Jade Dernbach, Chris Jordan and Tim Bresnan all going at more than nine runs per over, and only James Tredwell's off-spin offering real control.

In the day's other warm-up games, West Indies beat Sri Lanka by 33 runs in Mirpur, while in Fatullah, Australia beat New Zealand by three runs and South Africa beat Pakistan by eight wickets.