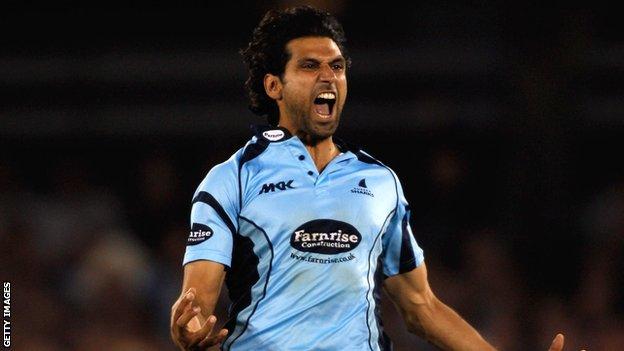 Sussex have released seam bowler Amjad Khan, bringing an end to his three-year spell at Hove.

The 33-year-old did not feature for the first XI last year after sustaining a broken wrist while working his way back to fitness from a knee injury.

"Amjad will be sorely missed by everyone at the club," Sussex cricket manager Mark Robinson said.

"He has been unlucky with his wrist injury in the final year of his contract. We wish him all the best."

He added: "He's been a match-winner for us in all formats and set great examples to our younger bowlers."

Denmark-born Amjad, who won one Test cap for England against the West Indies in March 2009, joined Sussex in 2011 after nine seasons with Kent.

The right-armer took 39 County Championship wickets at an average of 32.28 in his first season at Hove and in 2012 he picked up 22 scalps in four-day competition at 23.72 apiece.

After budget discussions for the new season, the two parties have agreed that Khan will be released to pursue opportunities elsewhere.

"I'd like to thank all the players and the staff at Sussex, who have helped make the last three years so enjoyable," Khan said.

"My departure is an amicable one and I look forward to seeing my friends and former colleagues be successful in the future."

Khan is currently involved in a cricket outreach programme in South Africa and is training with the Port Elizabeth-based Warriors franchise.