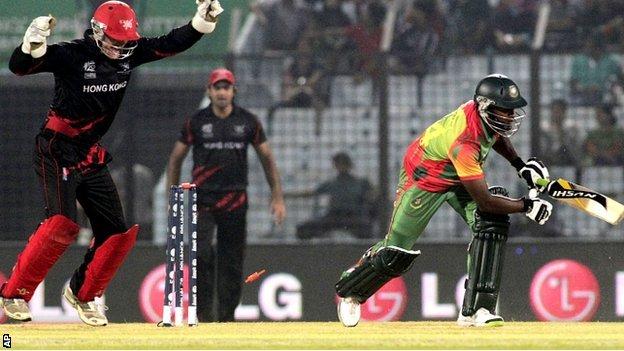 Bangladesh qualified for the Super 10 phase at the World Twenty20 despite a surprise loss to Hong Kong.

The hosts had to avoid a heavy defeat in Chittagong to progress, and Hong Kong's two-wicket victory was not enough to eliminate them.

Nepal earlier captured their second Group A win with a nine-run victory over Afghanistan.

available in the latter stages when they face Netherlands on Friday.

Bangladesh join West Indies, India, Pakistan and Australia in Group Two of the Super 10 phase, but they managed just 108 in 16.3 overs against Hong Kong.

The visitors posted 114-8 to claim their first win over Bangladesh, but the run rate was not sufficient to help Nepal past the hosts in their qualifying group.

Subash Khakurel (56) had earlier hit five fours and a six and Sharad Vesawkar struck 37 as Nepal made 141-5 after being asked to bat in Chittagong.

Asghar Stanikzai made 49 in reply as Afghanistan closed on 132-8.