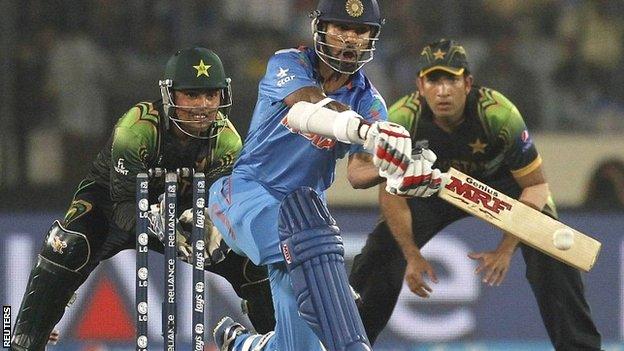 India began the Super 10 phase of the World Twenty20 with a commanding seven-wicket win over Pakistan in Mirpur.

Pakistan remain without a victory against India in nine World Cup and World T20 matches and will now seek a rapid improvement from their remaining Group Two matches against Australia, Bangladesh and West Indies, with only the top two teams progressing to the semi-finals.

England begin their campaign in Group One on Saturday against New Zealand, with Sri Lanka, South Africa and the big-hitting Netherlands to come.

The Pakistan innings began hesitantly after they were put in before a typically fervent crowd.

Kamran Akmal was run-out in the second over and more might have followed as the stuttering scoreboard created further anxiety.

When Amit Mishra had Ahmed Shehzad easily stumped in the ninth over with a prodigiously spinning leg-break and recorded that rarest of commodities in T20, the wicket maiden, it was 47-3 and only five boundaries had been scored.

Former skipper Shoaib Malik hit the first six in the 12th over with a glorious straight drive off Mishra, recording a half century stand in 42 balls with Umar as 26 runs came in two overs.

"Convincing, professional, clinical. They looked the better side and finished in great style. Not enough runs on the board for Pakistan and if you don't pick up early wickets it's going to be very difficult."

But Shoaib was caught at long-off in the 16th over, bringing the dangerman Shahid Afridi to the crease, and Umar was another to find the fielder, caught off Mohammad Shami in the 18th over.

Captain Afridi could manage only one boundary before he was well caught diving forward at deep mid-wicket by Raina in the penultimate over.

Despite a late six and four from the robust Sohaib, their total was significantly down on the average score on the ground of 148.

That was quickly emphasised by Rohit, who stepped down the wicket to square drive Junaid Khan over point for six in the third over

And when the mercurial Saaed Ajmal, who tormented England with 24 wickets in the three-Test series in early 2012, was introduced in the next he was promptly dispatched for three vigorous leg-side boundaries by Dhawan.

But Dhawan hooked recklessly off balance to fine-leg, Rohit played on to Ajmal and when Yuvraj Singh's off-stump was rattled by bustling seamer Bilawal Bhatti's first ball, three wickets had fallen in 15 legitimate deliveries.

However, Kohli calmly took his team towards their target with some sweetly struck, wristy strokes and the pugnacious Raina played a no-nonsense innings, seizing on anything short.

Raina was dropped twice, on seven and 28, but remained undefeated in a decisive partnership of 66 in barely eight overs.

India captain Mahendra Dhoni said there was more to come from man-of-the-match Mishra, who took 2-22 in only his second T20 international.

"I think Mishra bowled 70-75% of what he can bowl," Dhoni said. "But we are not sure of playing three spinners every time. A lot will depend on whether there is evening dew or not."

Counterpart Mohammad Hafeez said: "We were at least 20 runs short. Then we dropped some catches, which we can't afford in games like these.

"But there is a long way to go in this tournament and we will try to make a strong comeback."