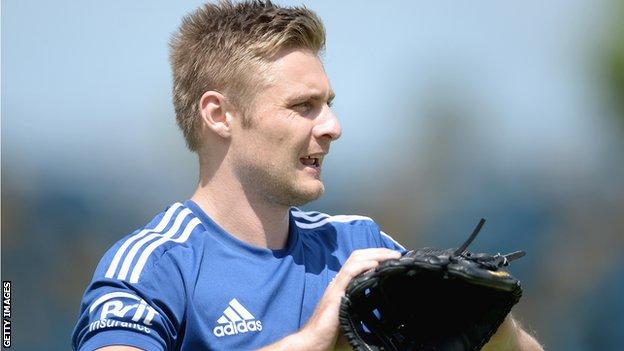 England all-rounder Luke Wright has been ruled out of the World Twenty20 with a right side strain, and will be replaced by Craig Kieswetter.

Wright, 29, is the third player from England's original squad to be ruled out of the tournament before their first match, which is against New Zealand in Chittagong on Saturday.

Joe Root and Ben Stokes have both been sidelined with hand injuries.

Wright tweeted: "Absolutely gutted to be leaving the World Cup injured. Hard to take but silver lining is I will now be at the birth of my second child."

The International Cricket Council has approved Wright's replacement by Kieswetter, and England hope he will arrive in Bangladesh by Monday.

They also have an injury worry over Twenty20 captain Stuart Broad, who missed part of the recent series in the West Indies with patellar tendonitis, and although he insists he can play a "full part" in the tournament, conceded that he would need an injection to get through it.

Wright and Kieswetter were both part of England's World T20-winning side in 2010.

But Kieswetter, who has played 46 one-day internationals and 25 T20 internationals, lost his place as England's limited-overs wicketkeeper to former county team-mate Jos Buttler just over a year ago.

Sussex's Wright made his England debut in both limited-overs formats in 2007, and has played 50 ODIs and 51 T20 internationals, while starring in T20 franchise cricket around the world, especially the Big Bash in Australia.

While he has remained a T20 regular for England, he spent more than two years out of the ODI reckoning until his recall last September, and has recently struggled with the bat, only making 30 runs in his last nine international innings in either format.