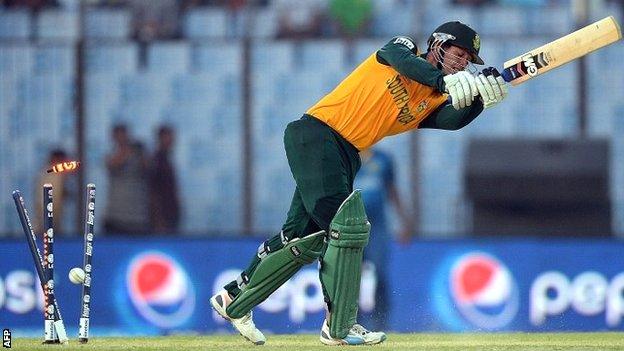 Sri Lanka beat South Africa by five runs in an absorbing Group One match at the World Twenty20 in Chittagong.

Left-hander Kusal Perera hit 17 in the first over and made 61 with six fours and three sixes as Sri Lanka posted 165-7, spinner Imran Tahir taking 3-26.

It was fitting that the two strongly fancied teams in the group, which also includes England, New Zealand and the Netherlands, produced a high-calibre contest.

"The Sri Lankans are a pretty venerable side with Dilshan, Sangakkara and Jayawardene who have played an awful lot of cricket, but they held their nerve, and Malinga bowled a brilliant last over."

In one of the more remarkable starts to an international match, the world's premier fast bowler Dale Steyn was struck disdainfully for two off-side fours and then a flick over mid-wicket for six by Perera, playing in only his 12th match.

Steyn completed the opening over by rattling Tillakaratne Dilshan's stumps for a golden duck.

Perera, a 23-year-old natural right-hander, re-modelled his technique to emulate his childhood hero Sanath Jayasuriya, and there were distinct similarities with the former Sri Lanka opener as he reached his fifth T20 fifty from 29 balls.

However Tahir applied the shackles with a spell of 2-16 in three overs, deceiving Kumar Sangakkara and Perera into top edges, and it needed a workmanlike 43 from 32 balls by Angelo Mathews to take the Sri Lankans to their highest T20 total in five matches against South Africa.

South Africa had their own dashing left-handed opener in the form of wicketkeeper De Kock, also playing his 12th T20 international, and the wiry 21-year-old dispatched Nuwan Kulasekara for two fours and a six in the third over.

His exciting innings was ended on 25 by Lasith Malinga's third ball when he was brought into the attack in the fifth over, a trademark yorker giving the unorthodox paceman a record 34th wicket in World T20 matches.

When the rate began to rise, Duminy accelerated with two fours off Thisara Perera and, in the same over, somehow managed to flick a full length ball from the paceman over his own head, over the wicketkeeper's head and over the ropes for one of the more unlikely sixes.

Duminy shared 28 in barely three overs with AB de Villiers, who manoeuvred the ball expertly before an uncharacteristically reckless swipe brought about his dismissal caught behind with 56 needed from the final six overs, while Duminy was caught at deep mid-wicket with 47 required from 26 balls.

Powerful left-hander Albie Morkel thumped spinner Ajantha Mendis for successive sixes way into the leg-side distance but in attempting a third maximum hoicked a full toss to the fielder on the mid-wicket rope.

South Africa's susceptibility in close finishes resurfaced and a shrewd penultimate over from Kulasekara over cost only four runs.

In the final over from Malinga, the big-hitting Miller was well short of his ground attempting a frantic second run, and Tahir's six off the final ball was academic.