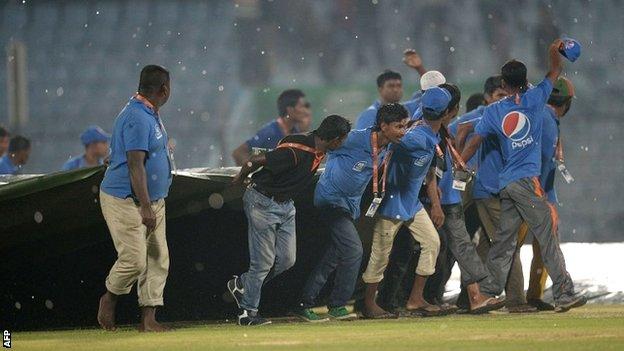 England lost to New Zealand under the Duckworth-Lewis method as their World Twenty20 group match in Chittagong was abandoned because of a thunderstorm.

Brendon McCullum struck a six to put the Kiwis ahead of the rate at 52-1 when the rain descended and his team were awarded victory by nine runs.

"England are probably feeling that this is another thing in this winter that has gone against them."

"We should have come off earlier, that was distinctly average by the umpires," England captain Stuart Broad said.

It was a galling way to start the tournament for England, who posted a competitive total and restricted New Zealand to 31-1 after four overs to be ahead on points in boxing parlance.

Five overs needed to be bowled in the second innings to constitute a match and that fifth over was not only completed but brought about a complete contrast in the outcome.

Astute skipper McCullum, conscious of the dramatic flashes of lightning moving ever closer to the stadium, stepped down the pitch to hit counterpart Broad for six over mid-wicket, then edged over slip for four more before hitting the final ball of the over down the ground for another maximum.

After familiar feelings of dread at 1-1 from one over having been put into bat, left-handers Ali and Lumb had invigorated England with some delightfully clean hitting on both sides of the wicket in a seven-over partnership.

Ali was particularly destructive with a spell of four fours and a six in six balls faced.

But he picked out deep mid-wicket in the eighth over and Lumb was superbly caught by Corey Anderson at third man in the next.

Buttler kept the scoreboard moving, while Ravi Bopara, Chris Jordan and Tim Bresnan all struck sixes in cameo innings, before the torrential storm thwarted prospects of an intriguing finale.

England will hope for better fortune in the second of their four group matches, also under the floodlights, against Sri Lanka at the same venue on Thursday.