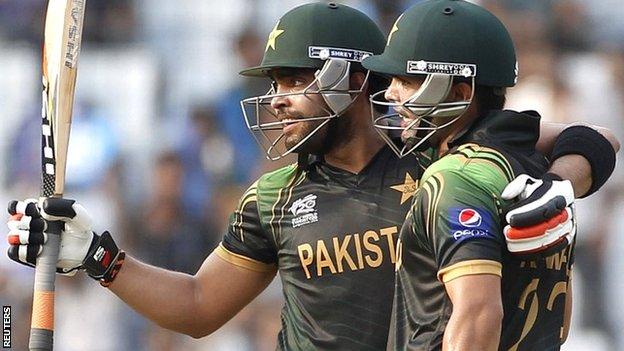 Pakistan recorded their first victory of the 2014 World Twenty20 with a 16-run win over Australia in Mirpur.

The Pakistan total of 191-5 was built around a scintillating 94 off 54 balls from Umar Akmal, dropped on 22, who struck nine fours and four sixes.

Australia lost two wickets in the first over but Glenn Maxwell fired six sixes in a remarkable 74 from just 33 balls.

Aaron Finch made 65 off 54 but no other batsman reached double figures as they were all out for 175 off the last ball.

"It was the best knock of my career simply because we were under tremendous stress having lost our first match," said Umar, who passed a fitness test earlier in the day after struggling with a hamstring problem.

"The management backed me to go out and express myself with the bat and I played my natural game."

Following their seven-wicket defeat against India, Pakistan knew another reverse would almost certainly spell the end of their chances of being one of the two teams to progress into the semi-finals from Group Two and their mercurial side produced a greatly improved performance.

They lost two early wickets, however, and it needed the stylish Umar to revive them in a 96-run partnership from eight-and-a-half overs with his brother Kamran, who made 31.

Umar was dropped on the boundary by 43-year-old Brad Hogg, who compounded his error by conceding 13 from his first over, before Kamran was dropped by Doug Bollinger off a Shane Watson no-ball and Umar dispatched the resulting free hit deep into the stands for six.

Australia tried the slow left-arm of Finch, who had bowled only one previous over in T20 internationals, and he conceded 18 from his six deliveries, thumped for two sixes over mid-wicket by Umar, who reached his sixth T20 fifty from 28 balls.

The 23-year-old fell six short of becoming the first Pakistan batsman to score a T20 international century when he swung a full toss to long-on off the first ball of the final over but Shahid Afridi, dropped by another veteran Brad Hodge on 14, added a cameo 20 off 11 balls.

Pakistan opened the bowling with left-arm spinner Zulfiqar Babar, the 35-year-old who only made his international debut last year, and he knocked back David Warner's off-stump and turned one away to catch Shane Watson's edge.

"What an amazing game of cricket. The two sides put on a great spectacle, there was good batting and bowling, although the fielding wasn't great, but it was a very enjoyable performance.

"Umar Akmal's innings was very impressive. He can be quite impetuous playing ridiculous shots but he showed great maturity to get Pakistan to a big score."

However, Maxwell dramatically changed the context of the match with some sensational hitting in his maiden T20 fifty from a mere 18 deliveries.

He obliterated the medium pace of Bilawal Bhatti, who conceded 30 from his first over, and the 100 partnership with Finch arrived in 51 balls, containing eight fours and eight sixes, Maxwell contributing 65.

Saeed Ajmal fumbled a chance at deep cover to reprieve Maxwell on 70 in the 11th over with 75 needed, but the fireworks were ended when he was caught on the boundary in the next.

Finch was bowled with 30 required from 14 as Ajmal conceded only a single from the 18th over and Australia, who have never won the tournament, will require more from their second Group Two match against West Indies on Friday.

"It was an outstanding fightback from Maxwell and Finch to get ourselves back into the game after losing our two most destructive batters in the first over," said Australia captain George Bailey.

"For them to rebuild and get the momentum back and maybe to get the game to the stage where we should have won was outstanding."