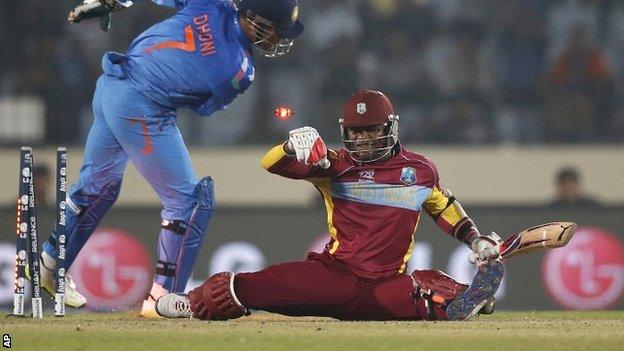 India made it two comfortable wins out of two at the World Twenty20 with a seven-wicket victory over defending champions West Indies in Mirpur.

Shikhar Dhawan fell in the first over of the India reply but Virat Kohli hit five fours and a six in a stylish 54.

He shared 106 inside 14 overs with Rohit Sharma who was unbeaten on 61 as India won with two balls remaining.

It was a mystifying performance from the highly-regarded Windies, on the same surface where earlier in the evening Umar Akmal and Glenn Maxwell had struck 10 sixes between them in Pakistan's 16-run victory against Australia.

The big-hitting opening partnership of Dwayne Smith and Gayle had no answer to some swing from the Indian seamers and 28 of the opening 36 deliveries were dot balls, Bhuvneshwar Kumar moving it in both directions in conceding just three singles from his three overs.

Gayle, dropped on nought in the second over, thumped Mishra's opening delivery for six but looked increasingly frustrated by his rare inability to dominate the bowlers.

The powerful left-hander was spilled again on 19 before he got barely halfway in his attempt of a Marlon Samuels quick single to backward point in the 13th over.

Mishra bowled 13 dot balls out of 24 and although there were three sixes as 21 came off the final over, the total was never likely to test the powerhouse Indian batting line-up.

"We were disappointed with West Indies but India did not allow them to play the way they wanted to. West Indies need to come up with a plan B."

There was some confusion over whether the target was 130 or 131 which caused a lengthy delay to the Indian reply and may have affected Dhawan, who was lbw for a duck.

But it was of little relevance as Kohli immediately found his fluency in a nonchalant fifty partnership from 33 balls with Sharma.

Kohli reached his fifth T20 half century from 34 balls, while Rohit recorded his sixth, and though they took 10 balls to score the final five runs, India further improved their position at the top of Group Two.

"Let's take it one game at a time," skipper Mahendra Dhoni said. "There is no point thinking too far ahead. We could have finished it an over earlier but that was up to the batsmen in the middle.

"We are playing well, but we still don't have a bowler who can bowl the 18th and the 20th overs. We are trying out various combinations to see who is better suited to the job."

With only two teams progressing from the group into the semi-finals, the Windies now have key encounters with Bangladesh on Tuesday and Australia on Friday, then face Pakistan in their final match on 1 April.

"We did not have enough runs on the board but I was happy with the way the bowlers came back," their captain Darren Sammy said.

"We know what our top order can do. It's just one game down, we have three more to go. We are not pressing panic buttons, we will regroup and come back strongly."