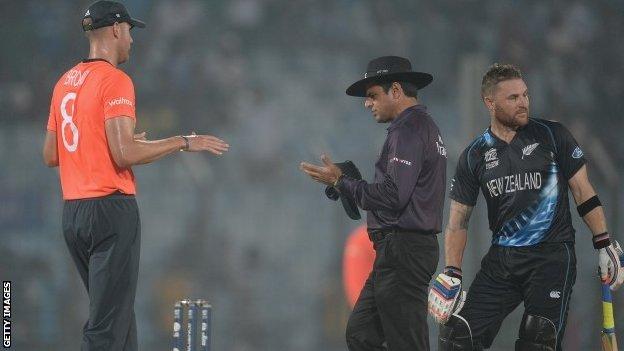 England captain Stuart Broad has been fined 15% of his match fee for criticising the umpires' decision to play on during a thunderstorm in their World Twenty20 defeat by New Zealand.

Broad said the players had been put in danger by the decision to play on in Chittagong.

He later admitted a level one charge of publicly criticising match officials.

"Shame to be fined. Back to bland and unopinionated press conferences I'm afraid," Broad tweeted.

England made 172-6 in their tournament opener in Bangladesh on Saturday, but lost by nine runs on the Duckworth-Lewis method after New Zealand's innings was curtailed at 52-1 after 5.2 overs.

The Kiwis needed to bat five overs to produce a result and Broad felt a lightning storm should have brought an earlier end.

"It's a game of cricket. You can't put players' safety in danger," Broad said.

"We had a batsman pull away because the lightning flashed before his eyes," he said, referring to New Zealand captain Brendon McCullum, who had stepped away from the fourth ball of the fourth over from Broad as lightning lit up the stadium.

"It was unsafe for the players to be out there and, to be as polite as I possibly can, it was distinctly average decision-making."

Broad added in his response to the fine via Twitter that he would now draw a line under the matter and focus on England's next group game against Sri Lanka on Thursday.

But he received support from BBC cricket correspondent Jonathan Agnew, who wrote on Twitter: "I'm all for protecting integrity of umpires, but they are not beyond reproach.

"For Broad to be fined for his comments regarding player safety yesterday is outrageous. (No over rate penalties, of course).

"Those who were not there and did not witness the lightning that made McCullum back off should not be commenting on this case."

Broad pleaded guilty to the offence and accepted the sanction offered by Javagal Srinath, of the Emirates Elite Panel of ICC Match Referees, on Sunday evening.

Mr Srinath said: "Umpires are the final judges of the fitness of the ground, weather or light for play.

"Weather decisions are the most difficult to make, but the umpires make the best decision possible, taking all factors into account.

"Such public criticism is not good for the spirit of the game. Mutual respect between players, match officials and administrators is paramount to the game of cricket."