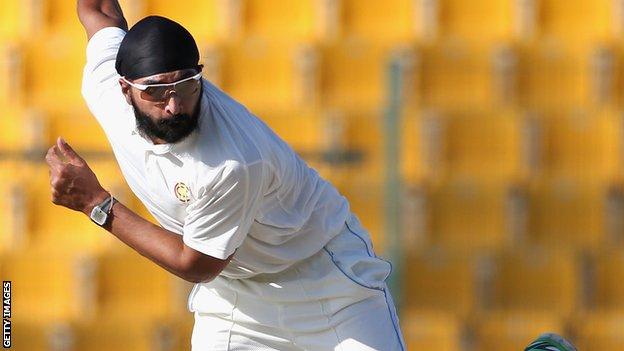 Keaton Jennings and Scott Borthwick struck half centuries as county champions Durham were bowled out for 248 on the first day of their day-night season opener against MCC in Abu Dhabi.

Durham lost their final wicket to the last ball of the day, with Chris Rushworth caught behind off Panesar.

Thoughts from the commentary box

"Monty Panesar took five wickets as spin dominated much of the day.

"But the Essex and England bowler wasn't the only one to cash in. While his Lancashire team-mates were playing a Young MCC side across the road, Kyle Hogg took four wickets as well.

"Durham could have been dismissed for around 200 but added 79 for the final three wickets, including a career-best 29 for last man Chris Rushworth.

"It was Panesar who eventually had him caught behind in the final action of the day, but after the new ball was taken Hogg took advantage to take four wickets of his own."