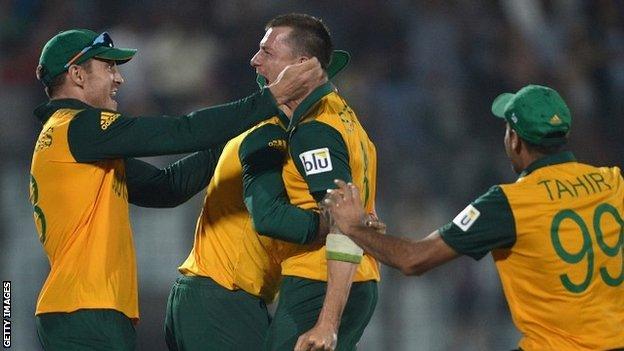 Dale Steyn bowled South Africa to a thrilling two-run win over New Zealand in the World Twenty20 in Bangladesh.

Chasing 171, New Zealand needed seven off the final over but Steyn took two wickets and ran out Ross Taylor (62) off the last ball to seal victory.

Fast bowler Steyn finished with 4-17 in New Zealand's 168-8 but team-mate JP Duminy took the man of the match award.

"It was a thrilling last 20 minutes, but it was captivating from the word go. Ebbing and flowing, and I thought New Zealand were in charge. But Dale Steyn, like all great players, loves the big stage and the almost impossible situation. Steyn imposed himself on that situation and got South Africa out of an enormous hole. That is why, as everyone acknowledges, he is a great player.

"The Kiwis will be absolutely kicking themselves because they will have thought they had it. This ground is full of neutrals, but they were entranced by what was an amazing game of cricket."

The win was South Africa's first of the tournament and leaves England bottom of Group One with the Netherlands.

Taylor, who hit three sixes in a row and brought up his fifty from 26 balls, looked like steering New Zealand to victory but, crucially, was not on strike at the start of the final over.

Steyn dismissed Luke Ronchi with the first ball and Nathan McCullum with the penultimate one and Taylor was left needing three off the final delivery.

The former skipper clipped the ball back to Steyn and the fast bowler ran out the New Zealander to wrap up victory.

"I was thinking all the time, Dale is my trump card and I need to bring him back in the game because he was bowling beautifully," said South Africa captain Faf du Plessis.

"But with the way they were hitting the ball, it was a fantastic effort from Dale."

New Zealand were in control on 57-0 after seven overs but South Africa struck back with Albie Morkel dismissing Martin Guptill (22) with his first delivery and leg-spinner Imran Tahir having captain Brendon McCullum stumped off a wide in the next over for four.

The enterprising Taylor struck Morne Morkel for three successive sixes and a fifty partnership with Kane Williamson came up in 27 balls.

Steyn, with the help of a superb diving catch from AB de Villiers, saw off Williamson for 51 and Corey Anderson for seven, while Tahir struck again as the Proteas hit back.

Du Plessis kept his premier bowler back for the final over and that proved to be the difference.

"We probably should have won it pretty easily," said McCullum. "But you can't take it to the last over against such a quality bowler like Dale Steyn.

"With a little bit of luck we would have got across the line, but credit to South Africa."

The fact that South Africa had such a big total was down to Duminy, who came to the crease in the seventh over with his side on 42-3, after De Villiers lost his balance attempting an extravagant hit and was bowled for five.

The 29-year-old left-hander, who hit his side's first six in the 12th over, put on a stand of 55 with Hashim Amla before Amla was out for 41 in an unusual manner.

Amla smashed an Anderson delivery straight at Duminy, who deflected the ball high into the air off the handle of his bat, and the bowler took the simplest of catches.

With his side on 100-4 after 15 overs, Duminy accelerated with some inventive shots, including one overhead flick for four and a straight drive that had umpire Aleem Dar ducking for safety.

He hit 22 in boundaries in the final two overs to give South Africa a competitive score that just proved enough.

"We were in huge trouble at the start," added Du Plessis. "JP took his time and then hit it sweetly at the end. It was a fantastic effort and one of the best innings I have seen him play."

Du Plessis was later fined 40% of his match fee, and his team-mates 20%, for maintaining a slow over-rate after the Proteas were found to be two overs short of their target.

South Africa return to action on Thursday when they face the Netherlands while England, who lost to New Zealand on Saturday, take on group leaders Sri Lanka on the same day.