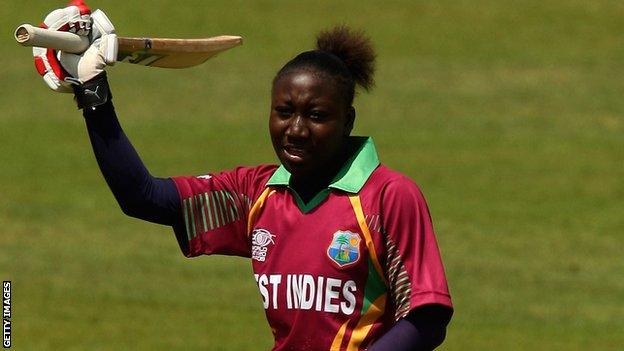 England lost their first game of the Women's World Twenty20 as West Indies won by nine runs in Sylhet.

The Windies looked set for a big total after Stafanie Taylor (56) and Kycia Knight added 87 for the first wicket.

"I don't think it was a shock, I think everyone knew it was England's toughest group game, and West Indies had done well in the warm-up games. Charlotte Edwards and Sarah Taylor were cruising after the powerplay, but I think Charlotte was most disappointed that she felt she gave her own wicket away when she was looking to see the team home."

Captain Charlotte Edwards led England's chase with 44 from 39 balls but fell with 40 still needed as Deandra Dottin (4-12) ripped through the middle order to shock the group favourites.

Although England now face three lower-ranked sides in India (26 March), Bangladesh (28 March) and Sri Lanka (30 March), they may have to win all three to qualify for the semi-finals.

With the possibility of rain curtailing their run chase, England had stayed ahead of the Duckworth-Lewis par score early on as Edwards hit four fours in the first over, while Sarah Taylor and Lydia Greenway also helped themselves to boundaries.

But the required rate climbed as Barbados all-rounder Dottin - a cousin of Windies men's coach Ottis Gibson, and better known for her explosive batting than her seam bowling - came on to bowl the 12th over and removed Sciver and Tammy Beaumont in quick succession.

The boundaries dried up and when Edwards edged Dottin to her fellow skipper Merissa Aguilleira behind the stumps, 40 were still needed from the last four overs.

Danielle Hazell and Anya Shrubsole gave England a brief glimmer of hope when they took 13 off the 18th over, but they still needed 18 off the last, and although Shrubsole bludgeoned the first ball for four, she was run out off the second as England fell short.

Earlier, England's bowling attack - including left-arm spinners Jodie Dibble and Rebecca Grundy, both making their international debuts - struggled to dislodge the Windies openers until Knight fell to Jenny Gunn for 43 in the 13th over.

Medium-pacer Sciver was not introduced into the attack until the 15th over, but sparked England's recovery as she removed two big hitters - Taylor and the dangerous Dottin - and bowled Knight's twin sister Kyshona in her first two overs.

Edwards said: "We were really disappointed, we got ourselves in good positions but couldn't get over the line. They bowled well at the back end of the innings, but it wasn't quite good enough from us.

The pressure will be on England after losing their opening group game - just as they did in last year's World Cup when Sri Lanka inflicted a shock defeat that ultimately denied them a place in the final after the result was taken through to the Super Six stage.

In Tuesday's other Group B game, Sri Lanka beat India by 22 runs after winning the toss.

Chamari Atapattu (43) and Eshani Lokusuriyage (34) helped Sri Lanka post 128-8 from their 20 overs, before left-arm seamer Udeshika Prabodhani took 2-9 from her four overs as India finished on 106-9.