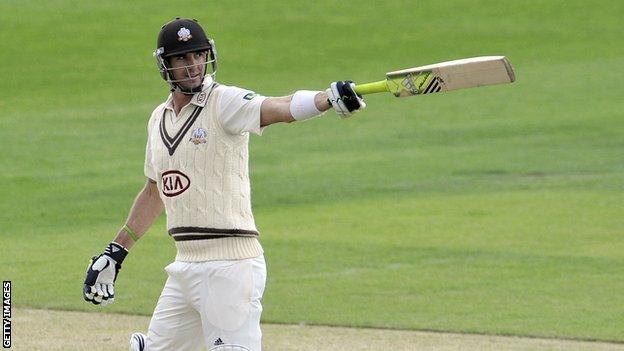 Former England batsman Kevin Pietersen has been backed to "prove a point" with Surrey after his international career ended in Ashes humiliation.

The 33-year-old, sacked after England's 5-0 Ashes whitewash by Australia, will return to the county game this summer.

"For such a destructive player to leave the England side is just a shame," said Surrey bowler Chris Tremlett, who was also on the Ashes tour.

"He'll want to do well as an individual and help Surrey do well.

"The way he's conducted himself within the dressing room and the training ground has been a credit to him and he has set high examples for the rest of our team to follow."

Surrey's new head coach, Graham Ford, who was recruited by Stewart during the close season and has known Pietersen since he was a boy in South Africa, said he was a "good enough player to prove a point in any format".

He added: "I have known Kevin for a long time and I'm sure he's going to be extremely positive in our dressing room.

"I don't really know what went on with England, but, unfortunately, he's got to move on from international cricket. Kevin will certainly entertain. It will be great for the fans."

Pietersen will captain Delhi Daredevils in the Indian Premier League (IPL), which starts on 16 April, before joining his Surrey team-mates at the end of the competition.

England's record run-scorer will this year be able to compete in a full IPL season for the first time, having previously been restricted by international commitments.

The England and Wales Cricket Board explained their decision to release Pietersen from his central contract, saying it had been made in order to "create a culture" in which Test and one-day captain Alastair Cook had "the full support of all players".