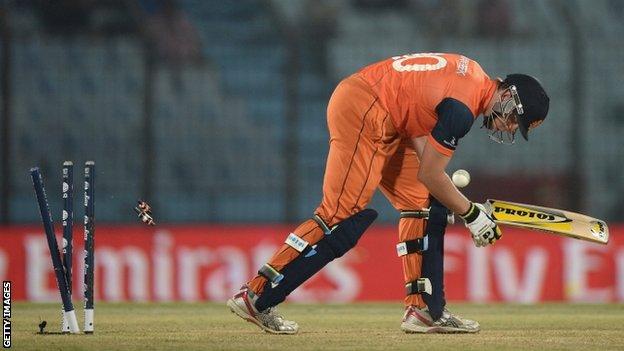 Sri Lanka dismissed the Netherlands for the lowest score in Twenty20 international history as they cruised to the top of Group One in Chittagong.

The sorry Dutch were bundled out for 39 runs in 10.3 overs, 17 fewer runs than the previous worst total.

Sri Lanka knocked off the runs in five overs for the loss of only one wicket to complete a nine-wicket victory.

"We showed a lack of discipline in that top order and exposed the lower order to Mendis and [Lasith] Malinga, which in any team is the end of the story.

"Luckily we have got three more games and we will show that we are better than this."

Kenya's 56 all out against Afghanistan in Sharjah last year was the previous lowest T20 international score, while Ireland's 68 against the Windies in 2010 was the worst at a World Twenty20.

The Dutch total was also the second lowest in any professional Twenty20 match, nine runs better than the 30 all out by Indian team Tripura against Jharkhand in October 2009.

The Netherlands had reached the Super 10 stage courtesy of a thrilling chase against Ireland on Friday in which they hit 19 sixes in 13.5 overs.

"I feel sorry for the Dutch. They seemed awfully overawed, and everything they did went wrong. They have some good players in their side but they had a nightmarish scenario where they lost wickets early. If you're in the Netherlands' camp you have to shrug your shoulders, one of those days, have a drink, almost laugh at it and get everyone rallying round and preparing for the next one."

But three days later, there were no sixes and only three fours as the Dutch had no answer to Sri Lanka's high-class bowling attack.

Stephan Myburgh had been the Netherlands' hero against Ireland with 63 off 23 balls, but the opening batsman only lasted three deliveries against Sri Lanka before spooning Nuwan Kulasekara to Lasith Malinga at third man.

In the following over, Michael Swart and Wesley Barresi fell to successive balls from Mathews to leave the Dutch in tatters on 1-3.

By the end of the six-over powerplay, they had limped to 15-4 and the wickets continued to tumble as Ben Cooper was run out for eight before his brother Tom was trapped lbw by Mendis.

"I have to apologise to the Irish and the other Associates for a performance like this because we are representing all of them," added Borren. "Associate cricket has improved but this is the sort of show where people see it and think it's no good.

"It is a shame but we'll be back. We have been at this level before and performed well."

The Sri Lankan reply was not without incident as Perera was hit on the thumb by Timm Van der Gugten's first ball of the innings and required treatment.

He recovered to score 14 off 10 balls but perished lobbing Malik Jamil to mid-on.

A day of abject misery for the Dutch was encapsulated in a horrible dropped catch by Bukhari to reprieve Mahela Jayawardene, who hit the next ball for four before clipping a single to see Sri Lanka over the line. Tillakaratne Dilshan finished 12 not out, with Jayawardene on 11.

"We never underestimate any team, but the guys did really well and we won the game easily," said Sri Lanka captain Dinesh Chandimal. "We have two more games, so we will keep our fingers crossed we will keep winning."

Sri Lanka, who beat South Africa by five runs in their first Super 10 match, top the group with two wins out of two.

They will face England on Thursday at 13:30 GMT after the Netherlands take on South Africa.