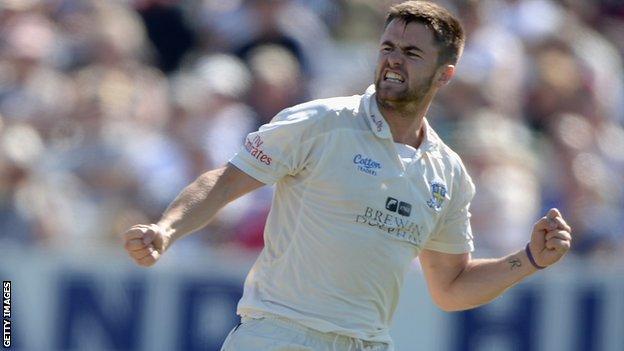 Seamer Jamie Harrison led the Durham fightback with five wickets as the champions ended day two of the season-opener against MCC with a slender lead.

Durham lost Keaton Jennings for a duck as they closed on 39-1, a lead of five.

"This game seems to be following a familiar pattern. When the lights come on here in Abu Dhabi the wickets fall. Ten fell after twilight began today and only one had gone down during the previous play in the sun. It seems the conditions become bowler-friendly at sunset.

"But the game is finely poised. The MCC took a slender lead of 34 - 32 of those runs coming from no-balls and Luis Reece, who eventually made 85, was the biggest beneficiary when he was caught behind off a Chris Rushworth no-ball when on one.

"There was a nice knock of 54 from Kent youngster Daniel Bell-Drummond as well, but he was the first to go when the light changed, with the MCC losing 7-77 after tea.

"Durham eventually closed on 39-1 after losing Keaton Jennings for a second-ball duck in the third over, bowled by Kyle Hogg."