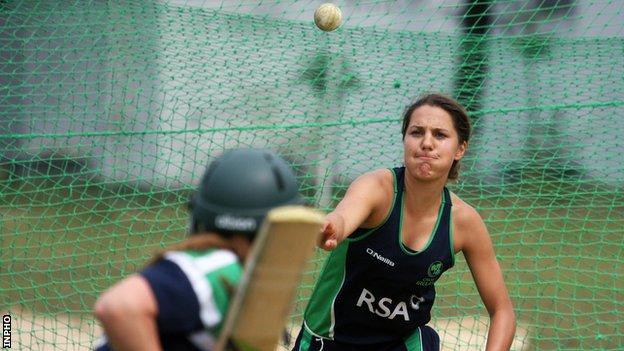 Ireland will open their Women's World Twenty20 challenge against New Zealand in Bangladesh on Tuesday with coach Trent Johnston convinced his team can produce shocks in the tournament.

Johnston was part of the Ireland men's side which stunned Pakistan and England at the 2007 and 2011 World Cups.

"I've tried to base our preparations around what Adi Birrell did with us in 2007," said Johnston, 39.

"The girls are of a similar ability to what the guys were back then."

Former Irish all-rounder Johnston has impressed upon his charges how "vital" good starts will be in their games in Sylhet against New Zealand, Australia [27 March], South Africa [29 March] and Pakistan [31 March].

"We need to stay in the game in the first six overs, whether we are batting or bowling. If that's the case, we'll give ourselves a chance to win games."

However, the Irish look to be be facing a tough opener against a New Zealand side that shocked holders Australia in the opening game of the tournament on Sunday.

The Kiwis earned a seven-run win over their neighbours and will be strong favourites to account for the Group A outsiders.

Johnston insists his team have made major strides in recent months, as evidenced by their T20 win over Pakistan in January.

"They can't be any more prepared heading into the game against New Zealand," added Johnston.

"They just needed a bit of direction and a bit of clarity about their roles and the girls have hit the ground running.

"They are like sponges looking for information and it's exciting times for them going into their first World Twenty20."