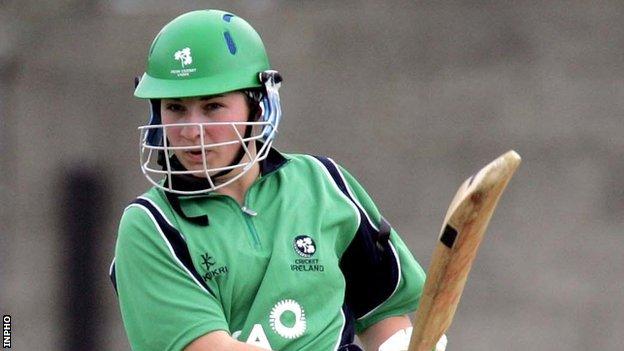 Ireland were beaten by 42 runs in their opening Group A match against New Zealand at the Women's World Twenty20 in Sylhet, Bangladesh on Tuesday.

Suzie Bates and Frances Mackay shared an opening stand of 116 for the Kiwis who posted a total of 171-3.

Irish opener Claire Shillington hit 28 and Cecelia Joyce top-scored with 41 but the reply was always behind the required run rate.

Ireland, the lowest-ranked team in Group A, finished on 129-5.

They can be well pleased with their batting display, which saw them find the boundary ropes on 17 occasions.

Shillington struck six of those in an entertaining 28 from just 25 balls after the early dismissal of Emma Flanagan (5).

Isobel Joyce kept the momentum going with a breezy 24, and the innings was given more than an air of respectability by a positive and inventive undefeated 41 in just 28 balls from her twin sister Cecelia.

The Irish are back in action on Thursday when they face Australia, once again in Sylhet.

The other teams in the group are South Africa and Pakistan.

"We are continually making the same basic errors which is disappointing," said Ireland coach Trent Johnston.

"The batting side of things has been great. To get 120 in the last three games, against full members and fully-professional outfits, has been very good.

"Our fielding was disappointing and the bowling good in patches.

"When you come to World Cups, you have got to be on your game in all three disciplines. If you are not, you will be found out."

In Tuesday's other game in Sylhet, Australia beat South Africa by six wickets with eight balls to spare.

Wicketkeeper Trisha Chetty top scored with 30 as South Africa made 115-9 after winning the toss, and opener Alyssa Healy was run out in the first over of Australia's reply.

But all-rounder Ellyse Perry, who came in with the Southern Stars under pressure at 34-3, saw them home with an unbeaten 41 from 29 balls.