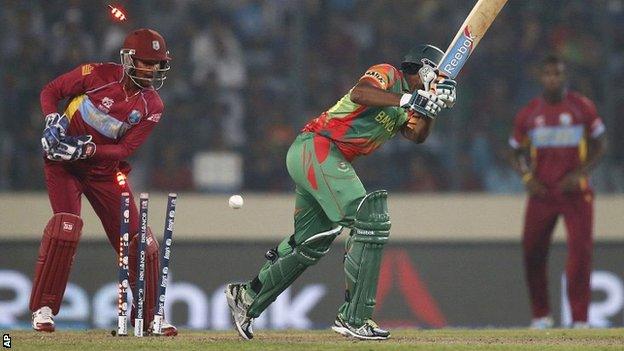 Defending champions West Indies captured their first win of the 2014 World Twenty20 with a comfortable 73-run victory over Bangladesh in Mirpur.

Dwayne Smith fired 10 fours and three sixes in 72 off 43 balls after the Windies were put in, but four batsmen were out for nought in their 171-7.

Bangladesh, in their first match of the Super 10 phase, lost three wickets for two runs in six deliveries.

Skipper Mushfiqur Rahim top-scored with 22 but they were all out for 98.

After stuttering against India's swing bowlers in their opening seven-wicket defeat, it was generally assumed the West Indies' batting line-up would find things easier against the Tigers, who, despite winning their qualifying group, were beaten by Hong Kong.

But Chris Gayle made only six singles from 16 balls in the first seven overs and was grateful for some robust leg-side strokeplay from his opening partner Smith, who recorded his third T20 international fifty from 33 balls with four successive boundaries off spinner Sohag Gazi.

Bangladesh's fielding frequently left a lot to be desired but skipper and wicketkeeper Mushfiqur was alert to spot Lendl Simmons out of his ground following a leg-side wide in the 13th over.

Three batsmen were out for golden ducks and, in addition, West Indies batsman Lendl Simmons was stumped off a wide so in effect faced zero deliveries. Their wicketkeeper, Denesh Ramdin, was the non-striker when run out for nought, having earlier faced one ball

Gayle hit two sixes off the slow bowlers but, despite remaining until the penultimate over, he again appeared out of sorts and was caught on the boundary for 48 from as many deliveries.

Skipper Darren Sammy's first two deliveries were dropped on the boundary by Mahmudullah and went for four but the final over saw four wickets and contained a stunning diving catch at backward point by Tamim Iqbal to dismiss Dwayne Bravo, one of four players to be out in the match having faced only one ball.

In reply, Bangladesh struck three boundaries in the opening nine balls before their collapse, which culminated in the key wicket of Shakib Al Hasan, bowled first ball by left-arm seamer Krishmar Santokie in a two-over spell of 2-7.

Mushfiqur played some stylish strokes but fell to another spectacular catch at backward point, this time a swooping low effort by Bravo.

That was one of three wickets to fall in the 11th over to the leg-spin of Samuel Badree, who claimed a career-best 4-15 from four overs.

Marlon Samuels dropped two catches in the outfield, but in a congested group also featuring Pakistan from which only two progress to the semi-finals, the Windies will go confidently into Friday's match against Australia, when Bangladesh face a formidable encounter with unbeaten India.

"We batted much better and then the bowlers did a good job, so were happy to get off the mark," said Sammy. "Once we got over 160 we backed our bowlers and we got it by a big margin which will also help our net run-rate."

Counterpart Mushfiqur said: "It was disappointing. The bowling was good but we dropped a couple of catches and let a couple of cheap boundaries through, so we gave away about 20 runs. Between 130 and 150 would have been a different ball game."