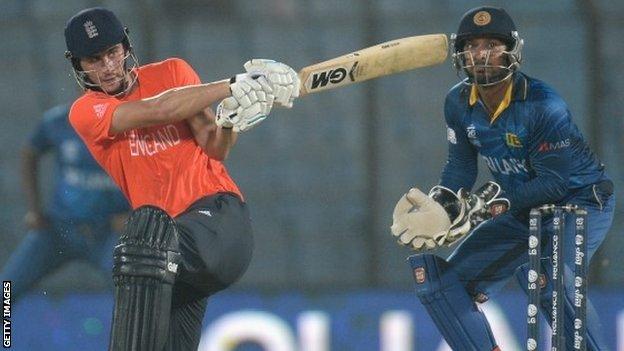 Alex Hales became the first England player to score a Twenty20 century as they pulled off a memorable six-wicket win over Sri Lanka in World Twenty20 Group One in Chittagong.

Hales, who made an unbeaten 116 off 64 balls, hit a six to bring up his hundred and hammered another to wrap up victory with four balls to spare.

It looked to be a target beyond England's reach when they lost Michael Lumb and Moeen Ali without scoring in the first over, but Hales produced an astonishing display of hitting to steer England to their first victory of the tournament following a weather-affected loss to New Zealand in their opening game.

England remain fourth in the five-team group, having played one game fewer than the top two - Sri Lanka and South Africa - with matches against the Proteas and the Netherlands to come.

Recording their highest successful run-chase in T20 history was even more impressive considering a disappointing performance in the field which saw the 2012 runners-up post a formidable total.

England, who won the toss, made an ideal start when Jade Dernbach had dangerous Kusal Perera caught down the leg side in the second over and appeared to have Jayawardene caught at cover by a diving Michael Lumb for a golden duck.

Despite television replays appearing to show a clean catch, third umpire Steve Davis ruled that the ball did not carry and Jayawardene was reprieved.

Playing a typically aesthetically pleasing innings, Jayawardene dominated a second-wicket partnership of 145 with Tillakaratne Dilshan (55), but was given further reprieves when he was dropped by Dernbach and Tim Bresnan on 19 and 80 respectively.

The 36-year-old was eventually bowled by England's quickest and most effective bowler, Chris Jordan (2-28), having faced 51 balls.

Jordan took a smart catch to dismiss a more sedate Dilshan, who was also dropped by Bresnan, and Sri Lanka were grateful to Thisara Perera's 23 off 12 deliveries.

England's reply got off to the worst possible start when Lumb was bowled by Nuwan Kulasekara and Moeen edged the next ball to second slip.

However, Hales, whose previous highest T20 international score was 99, and Morgan slowly set about about the chase with calculated aplomb.

Who is Alex Hales?

Did you know? Hales was briefly ranked as the best T20 international batsman in the world but is now rated third behind Aaron Finch and Brendon McCullum.

Notts batsman Hales, 25, took on the seamers while allowing Morgan, who hit seven fours and two sixes in his 38-ball knock, to be particularly dismissive of Sri Lanka's spinners.

Hales was dropped on 55 on the square leg boundary by Jayawardene before off-spinner Ajantha Mendis was taken for 25 runs in an over containing three Hales sixes in four balls.

The match was still in the balance when Morgan - with 38 needed for victory - and Jos Buttler fell to Kulasekara.

However, Ravi Bopara steered his first two deliveries - yorkers from Lasith Malinga - for four to seize the initiative for England.

The stage was set for Hales, who brought up his landmark with a flat six over cover, added another over deep midwicket and capped a remarkable victory by smashing Angelo Mathews almost out of the ground.