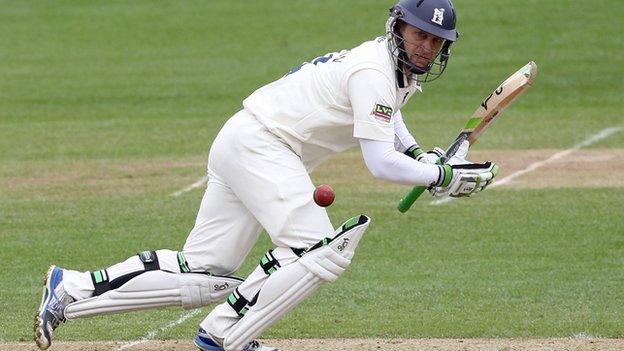 Warwickshire captain Jim Troughton's back injury will sideline him for the first month of the county season.

But the Bears will have plenty of cover as they are expecting to have all their international players available for at least the opening few games.

England batsman Jonathan Trott will begin his comeback in next week's friendly with Derbyshire.

Ian Bell, Chris Woakes, Boyd Rankin and Varun Chopra are all likely to figure in the team's opening games.

Warwickshire returned to training at Edgbaston on Wednesday after a training camp in Barbados and start their first pre-season game, also against Derbyshire on Thursday.

Apart from their England contingent, only skipper Troughton and pace bowler Tom Milnes did not travel to the Caribbean.

"We were disappointed not to have Jim Troughton," Bears director of cricket Dougie Brown told BBC WM. "But, due to his back surgery, he stayed behind to continue his rehab and Tom Milnes has a recurrence of his shoulder injury."

After last summer's catalogue of injury woes, Brown is grateful to be working from pretty much a clean slate.

And there is the added bonus of being able to pick Bell and Woakes, when they are back from the World Twenty20, winter Ashes tour party member Rankin, England Lions opener Chopra and a rejuvenated Trott, now that the fall-out from England's much-debated winter meltdown has been dealt with.

"It will be great to have all those guys to choose from during the first few weeks of the summer," said Brown.

"Add in the likes of Rikki Clarke, Keith Barker, Tim Ambrose and Jeetan Patel and you have a really strong team, and we'll be looking to start as strongly as we finished last summer."

Troughton, 35, who has been Bears skipper since 2011, missed most of the second half of last season, playing in only seven of Warwickshire's 16 County Championship matches, all of them before the middle of June, as well as missing the FLt20.

Although he played in eight of the county's 12 YB40 games, he did not appear at all after 19 August, missing the last month of the season completely.

Having reported back fit for pre-season training before Christmas, he then aggravated the injury, forcing the need to operate - and he is now not expected to return until mid-May at the earliest.