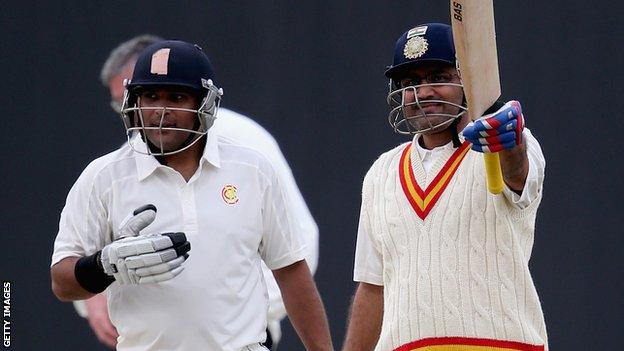 India's Virender Sehwag condemned Durham to defeat in the county season curtain-raiser in Abu Dhabi with a superb 88-ball century for the MCC.

He shared a fourth-wicket stand of 105 with Nottinghamshire's Samit Patel before falling to Jamie Harrison.

Patel was 48 not out when a delivery from Harrison ran away for four byes to bring the match to an end.

Sehwag last played international cricket just over a year ago, but showed he is still a batsman to be feared when in the mood by striking three fours in the day's opening over from seamer Harrison.

Although Mark Stoneman's 115 on the third day had given Durham hope, their largely inexperienced attack was unable to stem the flow of runs from the MCC captain.

His half century took only 47 deliveries and by lunch he was only five runs short of three figures, England Test hopeful Scott Borthwick having taken the only wicket to fall during the first session when he claimed a return catch from Kent's Daniel Bell-Drummond, who made 27.

Sehwag's hundred arrived shortly after the resumption with a second four in three balls off Harrison, but the bowler gained a small measure of revenge when he was caught by Paul Coughlin.

Sri Lankan Prasanna Jayawardene made an unbeaten six after joining Patel for the final rites, before the game ended from the final ball of the day's 31st over.

"Indian Test star Virender Sehwag gave everyone a reminder of why he has been one of the best batsmen in the world in the last 15 years.

"Having been dismissed for five by Durham in the first innings, he took full revenge in the second, and athough he was out with the job not quit complete, the MCC were already well on top and had six wickets in hand as they gained victory early in the second session on the final day.

"Sehwag will be back at this ground in a couple of weeks in the IPL (Indian Premier League) and still has aspirations to tour England with India this summer. Perhaps his approach can be explained by him having one eye on the weather as, unusually, it had rained most of the night and forecasts predicted thunder in the later part of the day.

"For their part, Durham had four days of competitive cricket on a grass wicket, a far cry from last season when most of their pre-season plans were wiped out by snow.

"They were missing four key players for various reasons, but those who came into the side generally did a good job and gave coach Jon Lewis some food for thought for the summer ahead."