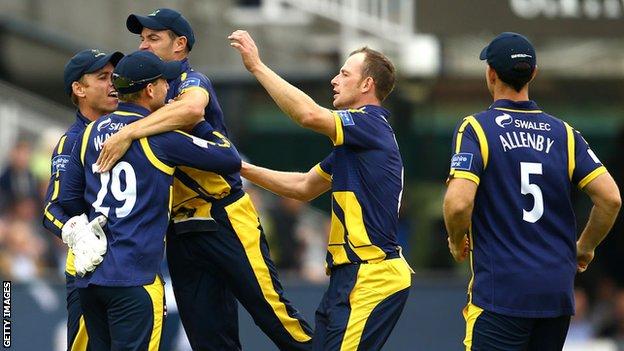 The year 2013 will go down as a mixed year for Glamorgan County Cricket Club, and management changes over the winter are intended to reverse fortunes for 2014.

The Welsh county finished last season one place from the bottom of Division Two of the County Championship, but made the final of the YB40 tournament at Lord's.

That ended in an 87-run defeat for Glamorgan, but in many quarters was viewed as the first green shoots of a recovery.

In truth the county were a better team than their lowly championship position suggested, but the absence of a ruthless streak cost them dearly.

Too often they had to rely on individual players rather than teamwork - a streak that senior management changes during the winter were designed to address.

Hugh Morris's appointment as the county's chief executive and managing director to replace Alan Hamer was the first major development, quickly followed by the appointment of Toby Radford as head coach following the departure of Matthew Mott.

Morris was one of Glamorgan's finest batsmen, and allied to his success in transforming England's fortunes during his 16 years with the England and Wales Cricket Board, is his determination to succeed at his home club.

Since Toby Radford was appointed as head coach with Steve Watkin and Robert Croft alongside, Morris has instilled a work ethic which should improve performances.

Only nine centuries were scored by Glamorgan's batsmen last season, four by Murray Goodwin, who at the age of 41 averaged 57 and was the club's leading scorer.

The club will hope the former South Africa batsman Jacques Rudolph - who has signed a two-year contract - will bolster the top order, although he will miss the opening game against Surrey because of his involvement in South Africa's Ironman competition.

He is likely to open the innings with either Will Bragg or Gareth Rees, who responded to being left out at the start of last season by scoring two centuries on his return.

Chris Cooke's forthright stroke play earned him a place in the championship team and with the admirable Jim Allenby and Mark Wallace in the middle order, Glamorgan appear well equipped to compile sizeable totals and exceed the 41 bonus points they gained last season.

The bowling attack will again be led by Michael Hogan, who proved a revelation during his first year with the club, taking over 100 wickets in all competitions.

Although Mike Reed will miss the opening two months because of injury, Huw Waters - a potent new ball bowler - especially in early season conditions, is fit again and eager to challenge for a first team place alongside Graham Wagg, John Glover, Will Owen and the promising Rory Smith.

The former Warwickshire and Sussex seamer Andrew Miller is on trial and has shown encouraging form in pre-season games.

With four more Twenty20 games this year, and a 50-over competition to replace the previous 40-over format, there will be plenty of work for the two spinners Dean Cosker and Andrew Salter and possibly Kieran Bull, a 19-year-old off spinner who has been awarded a development contract with the club.

Allenby will lead the Twenty20 team against what is likely to be formidable opposition from the other counties, many of whom have already signed overseas specialist one day players.

Glamorgan are unlikely to sign a second overseas player for the competition, with Hogan and Rudolph available- although Hogan is classed as a "home" player.

The new 50-over competition takes place in July and August, and means a complicated timetable with four-day matches ending in midweek and being followed in a day or two by Twenty20 matches.

Critics would prefer the timetable to allow for a blocks of matches in each of the tournaments.

It means a hectic season for all 18 counties, and Glamorgan will need all their resources to meet the demands of a schedule that starts on 1 April and ends on 26 September.