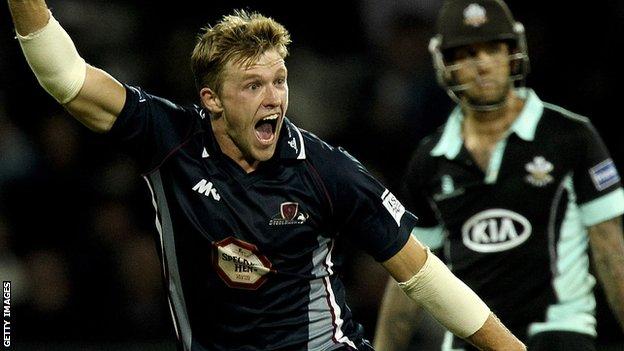 Northamptonshire all-rounder David Willey could miss the start of the season with an ongoing back injury.

The 24-year-old suffered a lower back stress fracture last year and has not bowled on the club's pre-season tour to Barbados.

"There are going to be doubts in his mind," head coach David Ripley told BBC Radio Northampton.

"His first thought is whether he has another stress fracture. We hope it's not and we can work through it."

Willey starred in Northants' FLt20 success last year, averaging 33.33 with the bat, taking 21 wickets and claiming a hat-trick in the final against Surrey.

He played the final part of last season with a sore back, but it was not until January, after he pulled out of the England Performance Programme squad, that the stress fracture was discovered.

And now, with Northants preparing for a return to the County Championship Division One and their opening fixture against Durham on 13 April, the club are carefully managing Willey's return.

"I think the start of the season is going to be tough for him," said Ripley.

"He's had a lot of support in trying to get him back for the start of the season. The first game would look a long shot, given he hasn't bowled a ball in anger yet."