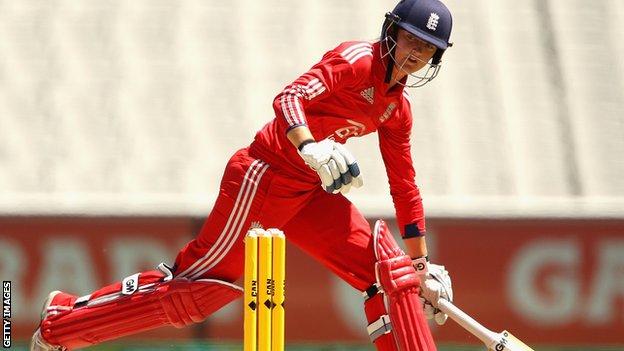 England responded to defeat in their opening match with a five-wicket win over India at the Women's World Twenty20 in Bangladesh.

Sarah Taylor top scored for England with 28, before Heather Knight and Jenny Gunn took them over the line.

England go on to face Bangladesh (28 March) and Sri Lanka (30 March) as they attempt to qualify for the semi-finals.

West Indies earlier enjoyed a comfortable win over Bangladesh as the hosts fell well short of their total.

The Caribbean side top Group B with maximum points from their two games, having beaten England by nine runs in their opener.

With the top two from Group A and Group B reaching the semi-finals, England enhanced their chances with a superb performance in the field against India.

After electing to bat first, India were restricted to 95-9 by Charlotte Edwards' side, with Anya Shrubsole's four overs bringing her three wickets for six runs.

England's reply began quickly, with 10 runs off the first over, before Edwards and Tammy Beaumont fell in quick succession to give India hope.

But Taylor's third-wicket partnership with Lydia Greenway put on 31 to move England past 50 before she was caught and bowled by Poonam Yadav.

"It was a must-win game and the girls responded brilliantly, led by Anya in the bowling and fielding," said Edwards.

"The bowling was outstanding, but the fielding for me was the thing we really needed to up and I think we did that with some good catches taken.

"The batting is slow and steady at the moment. We're getting off to quite good starts and having a bit of a falter in the middle, but it's about getting over the line in tournament cricket and we did that.

"We'll take a lot of confidence but move on quite quickly to Bangladesh. The next two are must-win games for us."