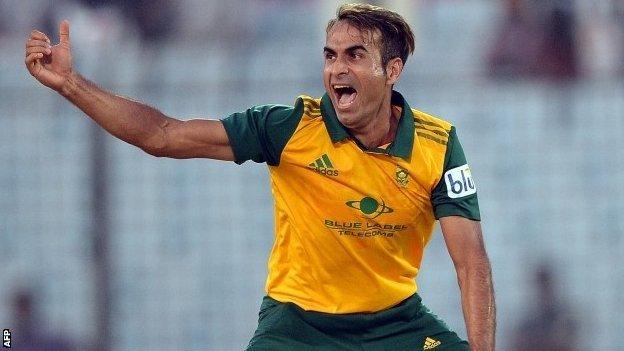 South Africa held their nerve to seal a dramatic six-run win over the Netherlands in Group One of the World Twenty20 in Chittagong.

The Proteas had been restricted to 145-9, Hashim Amla top-scoring with 43 as medium-pacer Ahsan Malik took 5-19.

The Netherlands raced to 80-1 inside eight overs before Stephan Myburgh was dismissed for a 28-ball 51.

Victory lifted South Africa into the second and final qualifying spot in the group, while England remain fourth despite beating Sri Lanka at the same venue later on Thursday.

It was a second victory of the tournament for South Africa, and the second successive time they have retrieved a difficult situation with the ball following their two-run win over New Zealand on Monday.

For the Netherlands, the only non-Test-playing nation in the group, it was a much-improved performance after they were bowled out for 39 - the lowest score in Twenty20 international history - against Sri Lanka in their previous match.

"As miffed as I am with the fact that we didn't get over the line I am also proud with the way we stepped up after our game the other night," said the Associate side's captain Peter Borren.

For large parts of the contest, the Dutch were favourites to win after they bowled and fielded with great discipline.

Opener Quinton De Kock was dismissed in the first over and only Amla, playing a typically classy and wristy innings, found any real fluency before his 22-ball knock was ended when he was caught behind off Malik.

Skipper Faf du Plessis briefly threatened with 24 from 14 balls but AB de Villiers, with a run-a-ball 21, was more circumspect and both perished by picking out fielders on the boundary.

Led by Myburgh's explosive hitting at the top of the order, the Netherlands got off to a flying start and plundered Lonwabo Tsotsobe for 33 runs in his first two overs.

They were in a commanding position when Myburgh played on to part-time bowler JP Duminy but, from that point, South Africa began to tighten their grip.

There were 12 runs still needed when Mudassar Bukhari holed out to leave South Africa one wicket from victory, which they duly took when Timm van der Gugten was caught behind off Beuran Hendricks.

"I think we are making it hard for ourselves," reflected Proteas skipper Du Plessis. "It's a great sign when your side is not playing 100% and still gets over the line."